Mihbaj: A traditional Bedouin implement made of a wooden base with a footlong pestle that serves both as a coffee grinder and as a percussion instrument. A tool once emblematic of a once unified, once proud and once beautiful Syria, Riad Ismat‘s topical production gives a voice to the unheard who find themselves right in the middle a conflict that over the last few years has seemed to only escalate and dominates the Western media. 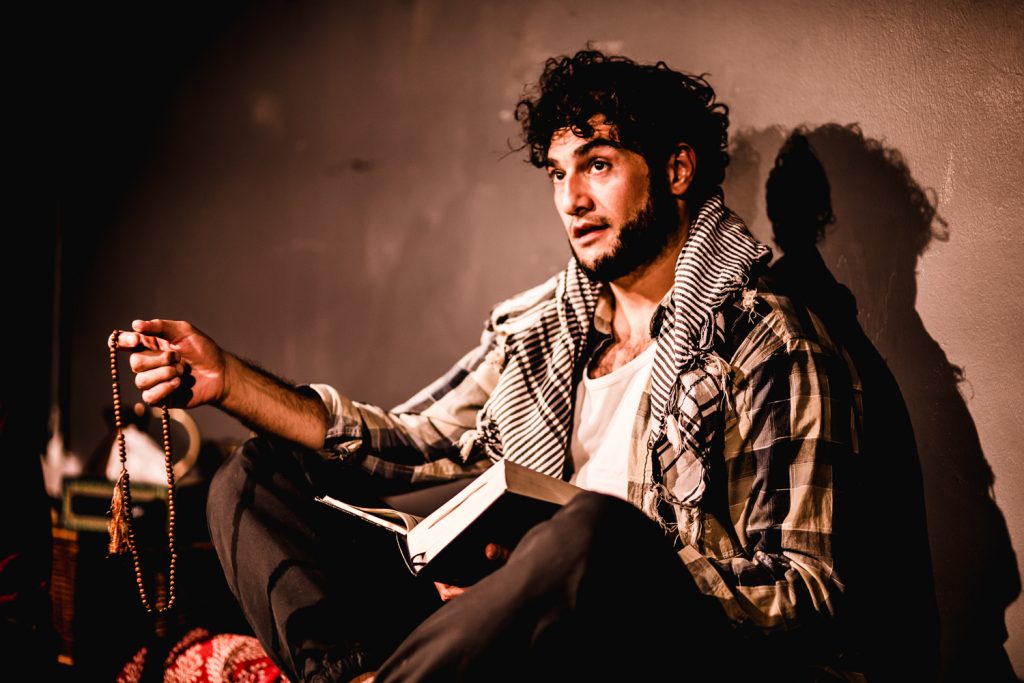 As I write this review, an image of a young boy covered in dust and wounded, due to being hit by an airstrike in Aleppo, Syria circulates the web. What’s heartbreaking is that these images are becoming constant, and that’s disconcerting. This play couldn’t have been produced at a more topical point in time. A Syrian native, Riad Ismat writes an honest and brutal narrative, zoning in on a fragile family dynamic. A mother rooted by the love for her home, yearning for what once was now finds herself battling with denial as she anticipates the arrival of one of her eldest sons, Fares (twin to Adnan). A young teenage son defiantly holds on to the history of their homeland and family and the eldest, Adnan is dutiful in his intentions to preserve a family already crumbling to pieces as the country does.

Ismat’s writing is politically charged. It’s the evening’s staple and is gradually a welcomed feature. The heaviness of the speeches may initially be perceived as being preachy however this is what makes the evening truly thought provoking. Without this relevant script, the play couldn’t be as potent as it is. Speeches meander from Syria’s diverse cultural heritage, to it’s religious foundations, to the very complicated matter of who to trust in their incredibly hostile political climate. With the likes of ISIS occupying most of Northern Syria and President Assad’s military regime destroying the lives of many, the script successfully heightens the hysteria felt by the nation, however this feeling of hysteria can be further explored through performance.

Sami Ismat, Riad Ismat’s son directs an intentionally understated piece, paying a respect to his father’s text. This allows for the script to literally do the talking and educate it’s audience. Blain Neale triumphs as the young, open minded and defiant Jasem, with Nicole Palomba‘s Naifeh; the matriarch of the family contributing moments of laughter, only to juxtapose this with her frustrating yet heartbreaking denial. Ricky Alexander Shah‘s Adrian offers an element of calm within this political internal and external war. These are the very beginnings of truly intriguing and well rounded characters however there is a greater need for nuance in performance.

The set is evocative of a modest Syrian family home, Middle Eastern mats adorn the black box setting, with a flat screen TV providing the family with informational soundbites and moments of filmic escapism. I’m no longer in Stratford for those 50 minutes, I’m a member of this family in Syria making this show successful in terms of making the global, local.

The evening doesn’t at all offer any solutions, rather it encapsulates the complexity of a once united nation that finds itself literally and metaphorically crumbling. This is a theatrical gem in the making, and reminds me exactly why I enjoy going to the theatre. 3.5/5