Based on the 1883 book The Adventures of Pinocchio by Carlo Collodi, Pinocchio by Jasmin Vardimon Company (in a co-production with Gulbenkian, Sadler’s Wells and Kent County Council) is a piece of contemporary dance theatre for ages seven plus. 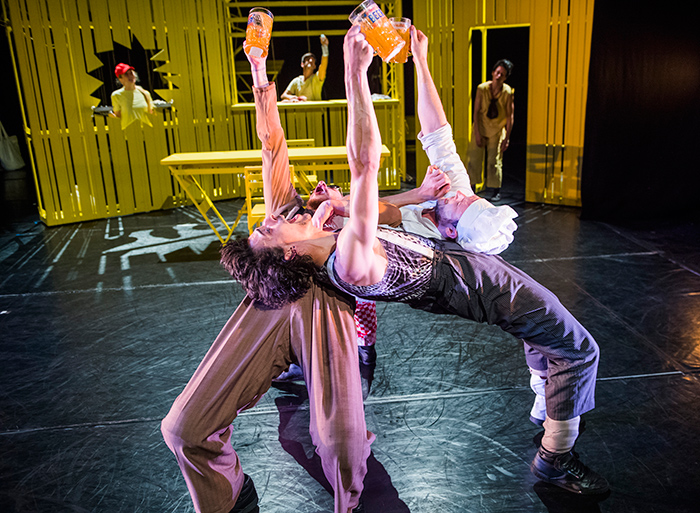 Performed by a company of eight dancers, the acrobatic and athletic choreography creates strongly- delineated character, interesting visual imagery, and (most effectively) portrays the movement of the inanimate, carved, wooden marionette Pinocchio (danced by Maria Doulgeri). Doulgeri’s performance is a tour-de-force (she is onstage for most of the ninety minutes). Committed, energetic and (crucially) convincing as the wooden puppet becomes a real human, Doulgeri is vulnerable, awkward and cheeky throughout.

Pinocchio is first seen as a lump of shadow wood, being carved by a shadow Geppetto (David Lloyd). A touching scene follows as Pinocchio is manipulated by Geppetto. There is power in the dynamic of an animate human being being inanimate and manipulated. Indeed manipulation is explored extensively throughout the performance – in one scene, Pinocchio goes to a puppet theatre – two dancers (Alexandrous Stauropoulos and Stefania Sotiropoulou), attached to aerial wires, become life-size marionettes to great comic effect. There is a real sense here of the dancer / marionettes having no movement of their own until the wires are pulled by the other dancers acting as puppeteers. The bodies of the two dancers are pulled about tortuously – even pony-tails are attached to the wires to bob up and down. When Pinocchio gets involved, he switches the radio over to a station playing Beyoncé and the puppets and their puppeteers seem to be manipulated by the music.

Vardimon uses isolated parts of the dancers’ bodies to good effect – the forearms of most of the ensemble conjoin to create the extra long arm of the frightening, beast-like puppet showman; hands all in a row depict the growing nose of Pinocchio (and are suggestive of Pinocchio thumbing his nose) and in one scene the soles of the feet of two dancers become the faces of a couple having a romantic dinner – culminating in them both sucking up the same extremely long piece of spaghetti. Three pairs of hands make the face of the cricket (speaker of the narrative) who appears throughout the evening. The dancers (dressed all in black) wear white gloves which are picked up by a U.V. light so that all we can see are glove lips, eyes and eyebrows. The lip-synching of this character is good, although there is too much constant movement of the other elements of his face. More specific and simpler movement is needed to bring this character fully to life.

Pinocchio falls in with a thoroughly deviant fox (Uroš Petronijevic) and an equally deviant cat (Estéban Lecocq) who persuade the puppet to bury his gold coins in the “Field of Wonders” only to nick them when his back is turned. There is a nice touch in this scene – after the coins are buried, the cat (as a cat would when going about its business in the litter tray) kicks the soil over the coins with his back legs.

A combination of loud electric soundscapes and a lack of change of pace cause the scene with the assassins and the land of toys scene to drag – with the exception of the moment when the children are transformed into donkeys. The shift from innocent folk accordion to electronic music as the children emerge from the shadows with donkey heads is disturbing.

The set includes a large bell tent (used as a shadow screen early in the show) and a number of yellow pieces of furniture and sections of wall hanging up in the background. When these elements are moved around for a change of scene it is distracting; the set works best when it engages with the honesty of found things – Geppetto sets sail on a pallet boat with a canvas sail – attached to the boat is a large, ripped plastic sheet (manipulated by a dancer) which flows and crashes around the boat as it “sails” across the stage on aerial wires, punctuated by Geppetto’s heart-rending cry of “Pinocchio!”. Magical and moving.

Early in the performance six of the dancers (in an ingenious bit of physicality) hold hands in a circle and revolve, rise up and drop to the floor like a wind-up toy – satisfyingly this exact bit of choreography is brought back at the end of the show (now including Pinocchio) – as the dolls turn, stand and drop mechanically, Pinocchio emerges from the artificiality with a different quality of movement – a real human at last.

Pinocchio is currently showing at Sadler’s Wells until Tuesday 25th October.  For more information on the production, visit here…