For a newcomer to the York Theatre Royal pantomime, Berwick Kaler’s reputation can be intimidating. The UK’s longest serving panto dame, Kaler has become a cult-figure in York and there’s a trepidation that comes with cult shows that if you don’t know the jokes already, you’ll never be let in on them. 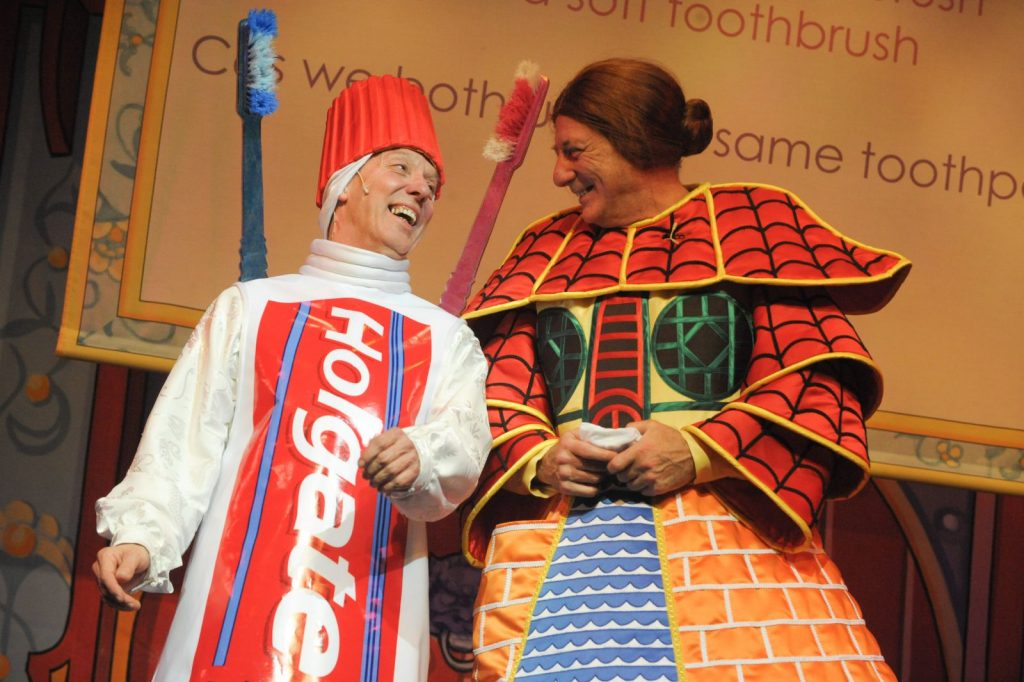 Those fears are abated as soon as the show starts, however: this is sheer pantomime. All glitter, clear vocals and broad silly humour: it’s delightfully stupid and stupidly delightful. It’s like I’m seven again. Kaler’s script is decidedly old school, hitting all the beats of traditional pantomime neatly and swiftly. You can check the slapstick sequences, adorable dancing mice and a good ol’ sing-along off your list of pantomime staples. That said, there are some interesting narrative details: notably that of Priscilla (AJ Powell) serving less as a “baddy baddy” and more as an allied stepsister to Cinderella. With a less likeable actor this might not fly, but in Powell’s capable hands we see a perfectly pitched performance as he plays the fall guy with sweet sincerity.

David Leonard also gives a brilliantly beastly turn as Baroness von Naff, playing up to the crowd’s booing and giving his all. Malice and exaggerated cackling aren’t done by halves here, that’s for sure. It’s great to see him in plenty of silly situations as well: we’re leant a more farcical side to the Baroness than in previous adaptations, and here get to enjoy this villain getting her way, but not without exposing a festive wreath lingerie set or running frantically around the stage to fool Cinderella.

All of the cast are primed and peppy, but Jake Lindsay is the ensemble stand out so it’s no surprise when he reappears as Dimdini later. His dancing is of a star quality where you can’t help but be drawn to his fluidity of movement. Considering how slickly everybody else is moving, it’s even more of a sign that Lindsay is one to watch for in productions to come.

For all the ad-libbing and occasional breaks in character (par for the course in this business), Cinderella is an incredibly tight show. There’s a slight drop in quality with the fun if not shaky short films, timed for the ease of changing set pieces on stage. Referencing Carpool Karaoke and the Rocky Horror Picture Show, these asides are definitely enjoyable if not a disjointed from the overall plot. It seems more for the benefit of Kaler and pals playing about- but they look like they’re having that much fun with it, you humour them.

Musical numbers are well placed and nicely varied, with nods from musicals as far-removed as Gypsy and Book of Mormon. Lyrics aren’t too altered, which works in favour of Worth It and  You Gotta Get a Gimmick, but takes on an unexpectedly dark tone for poor Buttons’ verse in Turn It Off.

References to Snapchat which don’t make much sense prove one thing: this panto is definitely not cool. But then again, with the level of magic and sparkle Cinderella possesses, it doesn’t have to be. Instead, the team have given this labour of love a transformative quality which makes the panto experience like going back in time. You’ll feel as excited to see this as seeing a childhood panto for the first time. Silliness after all is forever. 4/5

Cinderella is currently showing at the York Theatre Royal until Saturday 28th January. For more information on the production, visit here…