The much-anticipated new show, Love, written by Alexander Zeldin and devised by the company, is being performed at the Dorfman Theatre (formerly the Cottesloe Theatre), as part of the National Theatre. It is currently running until 10th January 2017. Alexander Zeldin is an associate director at the Birmingham Repertory Theatre, so no wonder the show is in co-production with the Birmingham Repertory Theatre and supported by the Quercus Trust, as Zeldin was one of the recipients of the Quercus Trust Award in 2015. 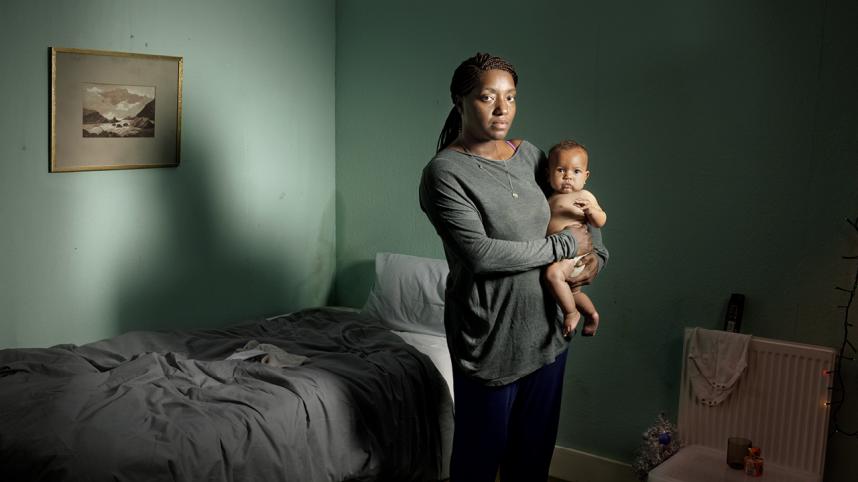 Zeldin has built a reputation as one of the ‘leading young artistic voices’ of the future. Since 2011 he has developed a network of UK performers to devise and collaborate around his work. These include a core company of East 15 alumni, Janet Etuk and Luke Clark. Past work include Doing The Idiots (National Theatre Studio 2012), Shemehe, and Beyond Caring (Yard Theatre 2013, then later transferred to the Dorfman Theatre).

The newly devised show, Love, intensifies the somewhat notorious Zeldin style; that being ‘reality-theatre’, and if a reality check is your cup of tea, Love will satisfy those morose taste buds, otherwise it will leave you gloomy despite any upbeat temperament! However, all is not forlorn, for Love takes the reins of a socially aware horse, which seeks to enlighten its audience by immersing its viewers in the terrible living conditions, which we find our characters in. The ingenious way lighting is used, proves as a forerunner in forcing the audience into inclusion. At various moments members of the cast turn on the audience lights; these lights are artificial and uncomfortably white and will remind you of being in the waiting room for getting your passport renewed (not somewhere you would want to wake up in, by all means). The ceiling window above the audience changes light as the play progresses and this gives the impression of a continuous, circular motion of time.

The company has successfully tried to include all members of an untold, British society; the ‘white trash’ (excuse my for use of better words), played by Anna Calder-Marshall and Nick Holder as a middle-aged, bulging man and his senior mother. The two show an incredibly complex human division of having a heart-intention of gold, but a verbal expression of dysfunction, which is evidently ruled by an unkempt lifestyle in dearth and hostile environments. The young and hopeful couple with more kids than they can afford, who have recently found themselves evicted due to the rise in the rental property market, the fleeting Syrian and the newly arrived mother from Sudan. These strangers find themselves together in temporary accommodation, which is uncomfortable, awkward and unbearable.

The play takes its lengthy time to get into, this adds to the unendurable condition on stage. The framework of the play revolves around artless and stumbling social interactions in the accommodation block. Yet despite the few words that are shared, we magically get transported into each individual situation, it as though a lime light is shone on each character at different times, and we are able to sympathise and even understand the odd remarks and the contentious looks.

There is a baffling analysis you experience as an audience member, which is heeding to the fact that although these people are in the same place at the same time, there is an intense, heavy loss of community spirit. It is not a comfortable situation, that is clear, but the relationship between the Sudanese woman and the Syrian man, who both speak in Arabic, show an intrinsic compassion to share their goods, and it glares you in the face that despite being estranged, this language is able to communicate easy.

The text rolls and stumbles in a naturalistic wave. Its high point depicts a heart breaking -then mending- moment, where Colin, played by Nick Holder, is hit by Emma, played by Janet Etuk; the reactions that follow crack all the past, awkward interactions into a human synergy that reminds the characters and the audience of human worth. It is a poignant moment, which will stay for a while.

Marcin Rudy coached the movement of the characters; these are unique and define each character, along with their accent and attitude. The dainty, weak shuffling movements of our senile character, Barbara, played by Anna Calder-Marshall, are totally accurate. Although sometimes funny, she will remind you of that grandma you know or have, who through loneliness and lack of belonging, has lost her grasp and is falling into a yearning for her death. Marshall’s accurate performance of old age creates screams in the audience and an ending in sobs.

There is a feeling that the whole play is on hold. The political message that the government has no face, no point of call, paints the picture of a constant dead end. Each hope of freedom is crushed; each dream of escape is transferred to an answering machine. Only the children dream outside the situation they find themselves in. The hopeful performance of Emily Beacock as Paige and the teenage angst from Yonatan Pelé Roodner as Jason shows a beautiful dynamic of a sullen brother and a bright sister. Jason dreams in rap videos, which stand for money and rebellion, Paige dreams of her ideal happy meal at McDonalds. The contrast of the two characters together brings light into this very grey play.

The circular motion of time will leave you wondering if anything has happened on stage, for there is not much change. As people leave the temporary accommodation, people will enter. Where one person has an option, another has a crushed hope. With a circular motion of time, all characters exemplify each other, and although each character is remarkably individual, the overall social statement, unite the characters together in order to signify the agreed message that ‘we are not heard, and we are not seen’. The solution? I leave that to you, audience member, for the play will not distinguish a future alternative.

Be prepared for feeling depressed, but equally brace yourself for some excellent acting, direction, and representations of a critically severe social problem, which the UK government is hiding beneath a blanket of cuts. Where a crack, formed by the bank crisis in 2010, sucks an uncounted population into desperation. You will not look at a homeless person in the same way that is all I can say.

Love is currently showing at the National Theatre until Tuesday 10th January. For more information on the production, visit here…