It’s usually the case that we look back at a movement, event, piece of art and really appreciate its significance. the Beastie Boys are a collective that can be banded into this phenomenon. On first glance, the Beastie Boys may appear as a group mocking the genre of Hip Hop, when in actual fact they were doing the complete and utter opposite. Pioneers in their field, they managed to rile up artists in the Hip Hop world as well as gain admiration from fans both nationally and internationally. Perhaps not as prolifically known as certain Hip Hop collectives, the Bestie Boys are seen as being one of the biggest selling rap collectives in music history. 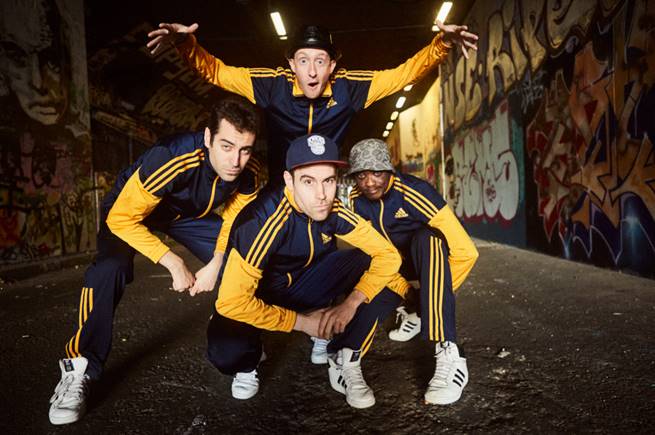 A semi-biographical look at the collective’s musical years via Def Jam and their debut Licensed to Ill, the show’s creator’s Adam El Hagar and Simon Maeder bring audiences an alternative musical, fusing the iconic songs of this pioneering collective with an animated energy that sums up the group’s musical ethos. You don’t necessarily have to be a fan of the collective’s music, this show serves as an education for those who may be unfamiliar with the group. The show brings the audience back to the history of Hip Hop, drawing on the influences of Dj Kool Herc and Grandmaster Master Flash. Fast forward to the 80s and Rick Rubin and Russell Simmons are ruling the roost with Def Jam Records.

Adam El Hagar, Simon Maeder, Daniel Foxsmith and Tope Mikun seamlessly rewind back into a musical landscape on the brink of change. Hagar, Maeder and Foxsmith provide the musical accompaniment for the evening; adding a layer of Beastie Boys authenticity. Mikun takes on the roles of the multiple managers and execs that operate behind the scenes, his charisma is undeniable however the mule-rolling can sometimes become confusing.

The animated nature of the evening is apparent, the evening doesn’t at all take itself seriously and this again is something that the Beastie Boys were known for. Talented musicians, they continuously pushed the envelope of what was to be expected of them, overall, polarising critics and audiences alike. Part concert, part play, the band find opportunities throughout the evening to interact with their audience, asking one member to play the drums for them, and others to become background extras in a music video. These light hearted moments continually break the ice and are constant reminders that the audience are there to enjoy the evening.

The music industry’s cut throat nature is drawn upon, with musical mogul Rick Rubin’s Avenue Q inspired puppet persona droning the heartless, robotic rhetoric of money making individuals. The Beastie Boys, like many musical acts at the time struggled to make a living and found themselves constantly battling their label. This show is in light of this is about rebellion, is about enjoying the admiration of millions however battling the constraints of corporations. This show has the potential to be something very special, in light of the shows that are really celebrating Hip Hop and changing the rules of what makes for a successful musical. Licensed to Ill structurally could do with being ironed out however its authenticity shines through. 3.5/5

Licensed to Ill is currently showing at the Southwark Playhouse until Saturday 24th December. For more information, visit here…

« Previous post
Artistic Director of The Vaults, Kieron Vanstone talks about his time at the venue so far!
Next post »
Peter Pan @ National Theatre Review