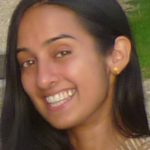 Having won the Adopt A Playwright Award from OffWestEnd.com to develop Made In India in 2013, Satinder Chohan’s collaboration with Tamasha Theatre Company has been 4 years in the making. Tackling the topical subject of the surrogacy industry in India, Made in India looks to offer a range of perspectives from an aspiring mother, a surrogate and a female doctor offering the treatment. Journalist and Documentary Researcher/Assistant Chohan talks about her latest play, tackling a sensitive subject and working with Tamasha Theatre Company.

What is Made in India about?

Set in a fertility clinic in Gujarat, India, it’s a play about surrogacy, motherhood and the fragile relationships between three strong women – Dr. Gupta, a businesswoman and fertility clinic owner, Eva, an infertile British woman and Aditi, an Indian surrogate. Surrogacy is Eva’s last chance for motherhood. For dairy worker Aditi, it’s a lifeline out of poverty and for Dr. Gupta, it’s just another transaction. Of course, the whole process between them doesn’t turn out to be so simple…

What inspired you to write Made in India?
I was applying for OffWestEnd.Com‘s Adopt A Playwright Award and had less than 24 hours to find an idea. Surfing the web (excellent research tool!), I read a shocking article about a white middle class English woman who paid an Indian village surrogate to birth her baby. The woman described her surrogate as a ‘vessel’. With my Indian village roots, the surrogate could have been any of my female relatives or if my parents hadn’t emigrated to the UK, even me. Their situation was loaded with so much conflicting emotion, culture and politics, I had to write a play about it, to explore and understand its fertile terrain. I submitted the idea, won the award, began writing the play. I think the story also touched a nerve because there had been instances of altruistic egg donation in my community. I had always wondered about the generosity of one woman towards another in those situations, what drove a woman to offer her eggs to another, to have a baby for another, without payment. So commercial surrogacy in which both strangers and payment were involved was fascinating to me.
Made in India’s integral themes are motherhood and surrogacy. What do you think audiences will take away from the play?
I hope audiences will think more about the rapid advance of science and the impact of life-giving and life-changing Assisted Reproductive Technologies on the people involved (adults, children, families) and society as a whole. We’re only just beginning to catch up with what this incredible, sometimes controversial science means ethically, morally and emotionally for all of us – even legally in the way countries such as India, Nepal, Thailand and Cambodia have recently banned commercial surrogacy. As a topical play about gender, reproductive science and economics, I also hope audiences might think a little about the ‘everything for sale’ world we live in. In the West, we’re privileged consumers who rely on low cost labour all over the world to provide the material stuff of our lives, in the cheapest, most efficient, fastest ways possible. In that supply and demand set up, we’re the ones who can afford to ignore those low cost workers and what their lives and struggles are actually like. While I understand why a village woman in a developing nation would do it, I don’t think it’s right that many have been so poor and neglected (deprived of adequate education, healthcare, social welfare) that they are compelled to hire out their wombs and deliver babies for money. Commercial surrogacy seems to be a really apt metaphor for our neoliberal times where the commodification of everything means that education, health, emotions, bodies etc are all for sale. So I hope audiences will think about the way science and economics conflict and play out through the female bodies of these surrogate workers – and the way we all contribute to creating an inequitable world through our material demands and choices.

How did the partnership with yourself and Tamasha happen?

After my first play Zameen, I began developing a new play Lotus Beauty with Tamasha. Later, Tamasha’s Artistic Directors Sudha Buchar and Kristine Landon-Smith nominated me to apply for the Adopt A Playwright Award, which I won with the idea for Made in India. Fin was actually on the interview panel and during my Adopted Year, became my (exceptional) mentor/dramaturg as I began writing the play. In a serendipitous turn of events, he became the new Artistic Director at Tamasha towards the end of that year and decided to take the play with him, where we continued developing the piece. It’s now his first main production as Tamasha’s Artistic Director and it feels so fitting we’ve come full circle back to Tamasha with it.
The show will tour later on this month. How are you feeling ahead of the tour?
I’m incredibly nervous but so excited to be pushing this baby out into the world! As a writer, it is tough to put your work out there, hoping audiences turn up to see and respond positively to something that has lived inside you for so long and you’ve worked so long to create. It’s been a real learning curve and wonderful working with such an immensely smart and talented team too. With a play about three strong women, we have an abundance of female creative talent on board – from an all-female cast featuring Ulrika Krishnamurti, Gina Isaac and Syreeta Kumar to our director Katie Posner and designer Lydia Denno. I feel really proud to have been part of such a woman-centred play and collaboration!
What advice would you give to writers tackling sensitive subjects such as surrogacy?
I think it’s important to do as much research as possible and to think about the subject from all angles as empathetically and fully as possible. I was very anti-commercial surrogacy when I began developing the play and had to alter my stance as I was writing. With sensitive topics such as infertility and surrogacy, one has to keep an open mind about the lives and motives of people affected and involved. For women like Eva, surrogacy is a desperate last shot at motherhood. For women like Dr. Gupta, it’s a business transaction and opportunity to help infertile women and less affluent women help each other through the beautiful act of childbirth. For surrogate women like Aditi, it might be a route out of poverty. So it’s important to try to understand why different women in this situation are driven to do what they do and to give the audience some understanding of the motives and lives of those characters as truthfully and honestly as possible. As with any emotional, biological or financial transaction in which people want something from someone else that might also bring out less palatable aspects of human nature. Surrogacy is far more complex than an emotionally charged black and white issue and I really hope the play reflects something of that.

Made in India will be on tour from Tuesday 24th January beginning at the Belgrade Theatre. For more information on the production, visit here…