Guillaume Pigé, Artistic Director of Theatre Re speaks to Theatrefullstop about performing at the London International Mime Festival! 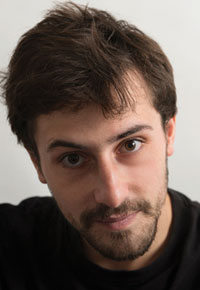 Established 8 years ago, Theatre Re have gone on to stage exciting pieces of theatre, with their previous production, Blind Man’s Song enjoying critical acclaim. Named after the prefix ‘re’, meaning ‘again’, Theatre Re look to ‘breathe life into something that is already there’ rather than create something completely new. Fusing Theatre, Physical Theatre and Mime, Theatre Re’s latest piece, The Nature of Forgetting delves into perhaps one of the most interesting themes in existence… memory. Read on to find out more about Artistic Director, Guillaume Pigé’s thoughts on the show and performing at this year’a London International Mime Festival.

Theatre Re will be performing The Nature of Forgetting at LIMF. How are you feeling ahead of the festival?

This is so exciting that it is difficult to put it into words… so we made a list:

The Nature of Forgetting is a piece looking at the power yet the fragility of memory. What inspired you to create a piece on this theme?

It all started with a question: What is eternal? Or what is left when memory is gone?

From there we worked with UCL Neuroscience Professor Kate Jeffery to explore what happens in the brain when we forget, how it works, where it happens and why. We also interviewed older people and people living with dementia and their carers to link the science to the real human experience. Our interviews resembled a lot of Desert Island Discs sessions as we explored the connections of music with memories and questions such as, do we ever forget? started to arise.

Ultimately, our piece is not just about forgetting. It is about the fragility of life and that eternal “something” we all share that is left when memory is gone.

Can you explain how you created the piece?

As a company we all start in the rehearsal room together from day 1 and we all created everything together. Building on our conversations with Professor Kate Jeffery, the material collected through our interviews, we started to improvise. We played with objects such as wooden school desks for instance but not only and little by little sequences started to arise, and then characters, lots of them and then different time periods, different stories, journeys… Then it was about making choices and little by little a piece started to appear.
Early in our development process, the work of Theatre Director Tadeusz Kantor and Writer Bruno Shultz were also really inspiring, especially when it came to deal with the world of childhood memories, which was extremely present in all our interviews.

You are a graduate of the Conservatory of Villeurbanne (FR) and the International School of Corporeal Mime in London. How have these courses shaped yourself as a performer and Artistic Director?


At the Conservatory I trained to become an actor. At the International School of Corporeal Mime I trained to become a mime, a theatre maker and a director. Both courses, along with one year spent studying at RADA and King’s College gave me the tools and the confidences to start making my own work and lead a theatre company.

What drew Theatre Re to perform at LIMF?


Of course, I am a bit biased but I think LIMF brings the best of contemporary visual theatre to London and so it is an immense honour to be part of it!

Will you be watching any other performances? If so who?

Etienne Decroux used to say this to his students – It is a quote from Guillaume The Silent – and I find it truly inspiring… “Hope is not necessary to engagement, nor success to perseverance”.

The Nature of Forgetting will be shown at this year’s London International Mime Festival from Wednesday 18th until Friday 20th January. For more information on the production, visit here…