The new puppet theatre company, Les Antliaclastes is lead by Patrick Sims; former creative director of Buchinger’s Boot Marionettes, and based in Maillet, France. The UK premier of Here Lies Shakespeare, supported by Institut Francais and Arts Council England, is currently being shown at Jacksons Lane Theatre as part of the London International Mime Festival. 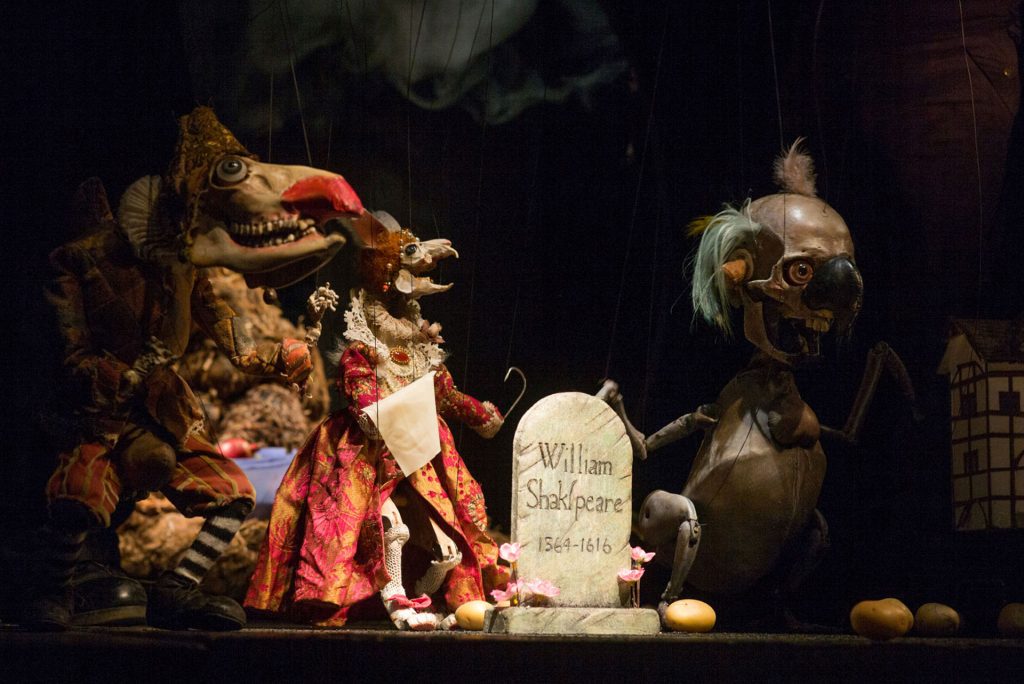 Here Lies Shakespeare is loosely based on Is Shakespeare Dead?, by Mark Twain. The cast of taxidermied animals tackles a gruesome debate via the excavation of Shakespeare’s notability and urges the audience to speculate the beliefs, or frauds, in society.
The play begins with a Day of The Dead themed eclipse; through darkness, smoke and peculiar, clicking sounds, a small, alienesque skeleton, scuttles mesmerizingly across the stage. I am unsure whether we are on Earth or some unfamiliar planet. The puppeteer follows suit, dressed as a giant Grim Reaper, moving the skeleton with effortless flicks of the hand.
As a whole, the play is beautifully constructed by the vast talent of artists who made the masks, puppets, set and sound design. The music is strange, yet phenomenal as a central piece to the play; the audience will become captivated by the raw sounds, which is at once delicate, claustrophobic and organic.
The four male performers/ puppeteers succeed in a wordless and threatening grip of the puppets and audience. However not all skeletons seem to have their head in tact and this organic glitch crunches comedy into places where there shouldn’t seem to be any room. With too many props for this narrative to chew I find myself lost at sea with a sea lion singing to seaweed while a giant lobster recites a monologue, barely audible above the sounds of the seascape.
The play is certainly thought provoking and has a very clear side toward the fraudulent Shakespeare debate. The potato head that buys a ‘Plot of Ideas’ is unveiled to be Shakespeare and there are some clever japes toward society, which will leave you questioning the nature of a belief.
With an ingenious amount of imagination and eccentric, although at times confusing, narrative, Here Lies Shakespeare is a show well worth seeing; if not for the obscure details, than for the dazzling skeletons in Elizabethan attire that will allure you. 3.5/5 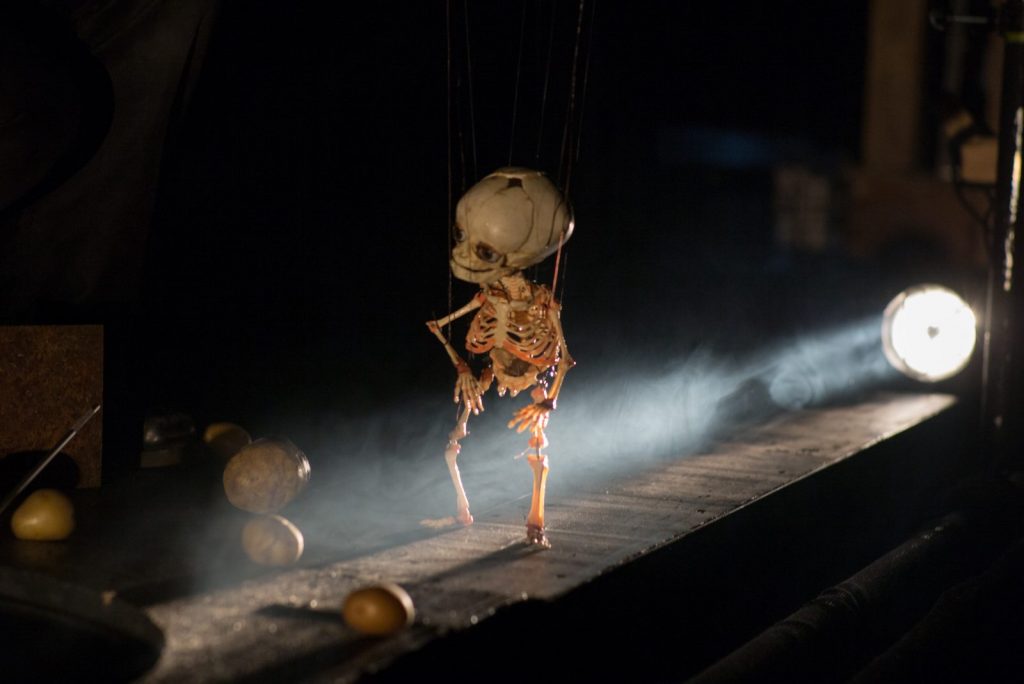 Here Lies Shakespeare is currently showing at Jacksons Lane as part of the London International Mime Festival from Wednesday 11th until Sunday 15th January 2017. For more information on the production, visit here…

« Previous post
Guillaume Pigé, Artistic Director of Theatre Re speaks to Theatrefullstop about performing at the London International Mime Festival!
Next post »
Written on Skin @ The Royal Opera House Review