On the 13th of January 2017 the second run of George Benjamin‘s opera Written on skin with words by Martin Crimp began at the Royal Opera House, conducted by the composer. Inspired by the story of a medieval troubadour (Guillem de Cabestaing) the core of the plot is an age-old love triangle – a standard opera plot device (think Norma, Tristan und Isolde, Il Trovatore, etc.) here given an unusual and fresh treatment. 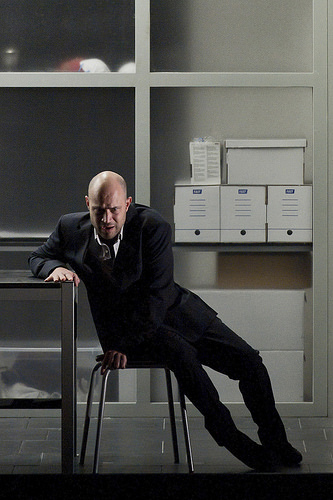 A protector (Christopher Purves) and his wife, Agnès (Barbara Hannigan) find their world disrupted and tragically transformed by a boy (Iestyn Davies) who has been commissioned by the protector to illustrate a manuscript celebrating the protector and his family.
The set, designed by Vicki Mortimer, is a dusty, brown, medieval room in which the three central characters play out their story; partly surrounding the room there are two floors of a modern archaeological laboratory (or archive), peopled by angels (or archivists) who, throughout the opera, stage manage the actors, props, lighting and set in a neat and forensic way. They carry props in and out of the medieval part of the set like archivists examining and storing evidence. They flick a light switch to change scene and alternate between the past and the present.

Katie Mitchell‘s direction of the piece is taut and apt – there is very little superfluous detail.
Christopher Purves is wonderful as the protector – with clear diction and lieder-like attention to detail he makes the character of the oppressive husband quite sympathetic. The protector is a simplistic, brutish man who understands his world less and less as the opera progresses to its final violent denouement; Barbara Hannigan as his wife has a different journey to travel – illiterate and oppressed when the opera begins, her self-knowledge and self-confidence grows until she taunts her child-like husband, goading him. Her portrayal is technically solid, wild and flowering. Counter- tenor Iestyn Davies displays considerable technical and interpretive skill as the boy; his first vocal entry is a gradually swelling, eerie note, almost instrumental. Elsewhere his voice rises to meet Hannigan’s soprano beautifully. Victoria Simmonds plays the second angel and also doubles as Marie, the sister of Agnès – in one scene in which the boy lies to the protector, Marie is seen to seduce the boy as she demands to be portrayed as Venus in his manuscript; this gives Simmonds a moment to shine and a welcome bit of light relief in this bleak world – it also cleverly allows the audience to be complicit – we know it is a lie, however alive and visceral it may appear.
Benjamin and Crimp create a credible world in their opera where the characters sing not only their own direct speech, but sometimes stage directions and thoughts and sometimes descriptions of each others’ actions. At times this gives a sense of detachment and frigidity to the three central characters – this devise being like a guard the characters put up – but it also feels like a forensic and distanced expression of the human passions and story (perhaps as viewed from a twenty-first century perspective – the archivists in the fluorescent-tube-lit laboratory – or as written in an ancient manuscript). When this verbal devise shifts to more direct speech an intimacy quickly develops between the characters (for example when the boy and Agnès have their first sexual encounter).

Benjamin’s use of the very large orchestra is sparing – any big sonorities punctuating a character’s statement, or suddenly crashing in at a dramatic moment effectively, without competing with the singers. His use of exotic instruments – for example the glass harmonica, bass viol and mandolin – creates a texture as brittle and archaic as the manuscript being created by the boy and handled by the angel archivists – as fragile as the human condition being portrayed on the stage. At times the timbre of individual instruments seems to match that of the voices – where does the human end and the instrument/object begin? 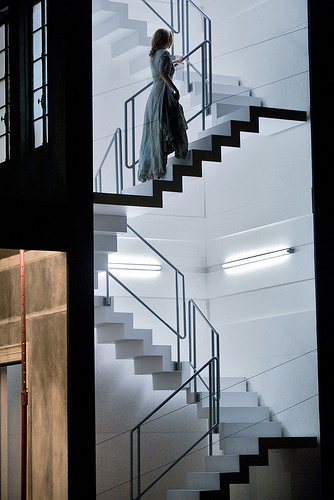 Written on Skin is currently showing at the Royal Opera House until Monday 30th January 2017. For more information on the production, visit here…