Following its premiere last year, Caryl Churchill’s critically-acclaimed play returns for a short run to the Royal Court Theatre before going on tour. 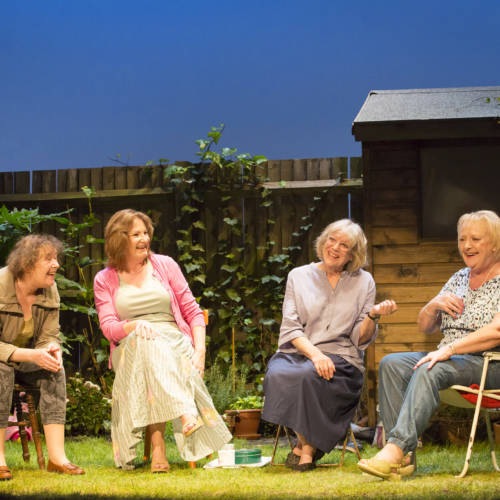 The performance begins with the sound of footsteps and traffic noise as we watch Mrs Jarrett (Linda Bassett) walking past a high wooden fence. A door is open and she is invited in to join three friends who are sitting in a cosy back garden, drinking tea. As they chat about family, friends and the latest TV hit series, they also begin to reveal their secrets, culminating in rather disturbing monologues. Sally (Deborah Findlay) is terrified of cats. She expects them to hide anywhere – even in a box of matches. Vi (June Watson) spent six years in prison after killing her husband with a knife, presumably in self-defence. Lena (Kika Markham) has not left her property in many years, she seems unable to move much at all and barely bothers to speak. Every now and again, Mrs Jarrett leaves the garden, moving into a darkness that is framed by pulsating orange light and as turns into Cassandra, describing a world destroyed by a wide range of catastrophes: landslides organised by big business that bury whole villages forcing the survivors to live underground; artificial floods to waste water and punish the thirsty; chemical leaks that poison the world unless one uses gas masks which are available through the NHS after three months whilst private patients can buy them in assorted colours at any time; a famine channelled by TV.

This apocalyptic fantasy, directed by James Mcdonald, who has enjoyed a long collaboration with Caryl Churchill, features a cast of actors who are all past 70 – a rare occasion indeed. The excellent cast fill their idiosyncratic characters with life. Although the play might be seen as a prophesy of the things to come based on where society is heading now, it is also darkly funny and absurd, celebrating the indomitable spirit of its characters. As designer Miriam Buether‘s beautiful garden is clouding over, the four actors treat us to an impressive rendition of The Crystals hit “Da Doo Ron Ron”. One of the best plays of 2016. 4/5

The Big Idea: the cast will be in conversation with Royal Court Artistic Director Vicky Featherstone post-show on Wednesday 8 February (captioned performance). Free with a ticket to that evening’s performance.

« Previous post
Are vocal lessons a necessity to a performer’s training?
Next post »
Beekeeper and Composer Heloise Tunstall-Behrens talks about creating music for The Swarm.