Beekeeper and Composer Heloise Tunstall-Behrens talks about creating music for The Swarm. 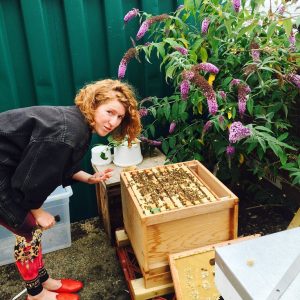 The Quorom’s The Swarm is a piece based on the increasingly apparent complicated societal structure of a beehive. It places topical themes of  hieracy and migration at the fore, with it easily holding up a mirror to our society. A stand out element of the show is it’s use of sound. Musician and Beekeeper Heloise Tunstall-Behrens talks more about creating  compositions for the show soon to play at the Vaults Festival.

Hi Heloise! The Quorom’s The Swarm will be showing at this year’s Vaults Festival. How are you feeling ahead of the show?

Heya! We’re feeling excited to perform the piece again. We’ve been evolving the piece since its premiere last September and are looking forward to sharing it with everyone. Among the changes are the replacement of the queen bee operatic solo with a recorded song and a light show, additionally there is one pregnancy among the cast!

You have composed pieces to accompany the production. What drew you to work on The Swarm?

I was excited by the sounds and frequencies emitted by the bee hive I look after and was interested to explore the process of swarming honey bees through vocal composition. It’s an incredibly dynamic process filled with drama, perfect for the stage! I also wanted to bring attention to the swarming process as a natural form of reproduction in bees, which is not usually condoned in the city. As you probably know, bees need our help and the more people can connect with them and realise that they are social beings like ourselves and function on a basis of love within the colony, the better.

I collaborated with Roswitha Gerlitz, contemporary opera director, artist and novelist to investigate the ideas of the collective. She had just finished a degree looking into the role of the chorus in contemporary opera and was interested to direct the movement. We worked together on The Swarm after collaborating on Be The Bee, a 10 minute opera with the same cast that was premiered at Tete a Tete Opera Festival in 2015.

How have you approached creating compositions for the show?

Auclair, with whom I collaborated on the music and the piece with, spent time decoding the frequencies of the bees during the process of swarming and set limitations for each section in terms of key. She then went on to record clips from inside the bee hive and the urban environment, weaving them into a soundscape with electronic composition. I approached each section of the piece by analysing the spatial formation of the bees at that point in the process and their mood and intention, creating vocal arrangements inspired by polyphonic singing of the Baka pygmies and mathematical ideas.

You’re currently working with a nine person choir, why did you decide a choir would be best to communicate the play’s themes?


I enjoy composing for the medium and had access to singers through Deep Throat Choir. I also felt that the voice was best suited to the piece as a way to bridge the connection between the social organisation of the bees and humans. Although the piece is about swarming honey bees, there are lessons from their decision-making process that humans can learn from.

You’re currently the bass player in the band The Landshapes. Does the process differ when creating songs/compositions for an album and for the stage?

With Landshapes, we generally jam together and then create songs from our favourite jams. It’s an organic process emerging from a collective sound – very free. For The Swarm, I approached composition in a more conceptual manner, giving myself limitations within which to work, for example to convey the storyline or to generate a particular feeling. Additionally, I had to communicate the particular spacing and organisation of the bees through the music, which affected the form of each piece within the whole composition.

Have you created compositions for the stage previously?


Other than Landshapes, I’m also in the band Lunch with Ulysses, a friend from Liverpool. We compose experimental pop. Be the Bee was the first composition for the stage with the group known as The Quorum.

What advice would you give to aspiring composers?

Don’t be afraid to get inspiration from anywhere!

The Swarm will be showing at The Vaults Festival from Wednesday 8th until Saturday 12th February. For more information on the production, visit here…

Heloise Tunstall-Behrens, The Quorom, The Swarm, The Vaults, The Vaults Festival 2017
1st February 2017by Theatrefullstop