For over 40 years, the London International Mime Festival has sought to showcase the very best practitioners from the fields of live art, physical theatre, puppetry and dance. The festival continually ups the stakes and just when you think you’ve witnessed it all… your expectations are pushed even higher. Situated in the Barbican’s more intimate space, The Pit; Euripides Laskaridis‘ Relic remembers to have fun and not at all take itself seriously. 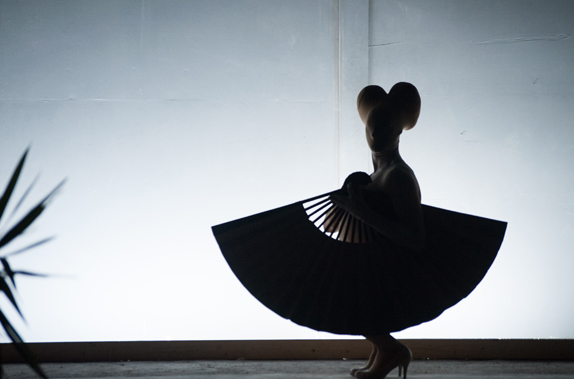 Laskaridis presents an exaggerated portrayal of the female form. This immediately gets the audience thinking and is oestentacious. The notion is bold however you can’t help but invest in the performance to hopefully have all questions answered. Perhaps modelled on our obsession in the West with Barbie dolls and what we consider to be the perfect body type? Hence the show’s title; a reflection on an object from the past that continues to capture the imaginations of many today. Laskaridis’ portrayal of the female form although initially shocking becomes the show’s normality. The show isn’t necessarily trying to make a serious statement, or maybe it is and could be incredibly subtle. The show pokes fun, Laskaridis presenting this doll as a clownish figure running and bumbling about the space and not as a perfect being.

Relic‘s use of sound is to be admired. Laskaridis plays around with how the set can in itself can become an instrument all of its own. He utilises both props and his voice to create a show that’s truly unique. He takes on the animalistic nature of a wolf as he howls into a microphone, his howls echoing into the distance. What’s great is that these howls, now recorded become faint and distant, as if there are wolves off stage. Laskaridis beatboxes, he speaks speedily in another language before switching to beatboxing at speed. This is very impressive and consequently mesmerising to watch. Water also trickles onto a wooden platform as Laskaridis reenacts going to the toilet. This is a comical, simple but effective. As there’s no speech, both sound and lighting take on roles of their own.

Relic‘s experimentation with lighting is fun to witness. The show relishes in the power of having the audience initially sat in pitch black before presenting the lone performer in shadow behind a white canvas screen, as well as being partially in shadow whilst sitting centre stage. This is achieved by Laskaridis holding a bright white fluorescent light and positioning it at certain angles. Euripides amazingly presents himself in shadow without standing behind a screen by using that same fluorescent light.

Relic is a challenging watch for its forward thinking ideas. It doesn’t have an apparent through line however it is playful and it’s important to remember that theatre can be just that. 3.5/5

Relic was shown at the Barbican from Tuesday 31st January until Saturday 4th February 2017. To find out more about Euripides Laskaradis, visit here…