Playwright Michael McLean started his career at the Liverpool Everyman Young Writers Group and has also been a member of the Royal Court’s young writers programme. His play Years of Sunlight focuses on the disintegration of a 30-year friendship but it also discusses some very relevant issues of how certain communities have been abandoned by the post-industrial political system. 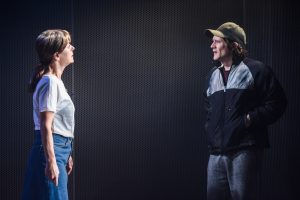 Skelmersdale, Lancashire, 2009. The middle-aged Paul, who has made his career in computing, returns to his childhood home in a 1960s Liverpool overspill estate. He intends to take his mother, Hazel, back to Dublin to live with him as her home has burnt to the ground. Hazel once left Ireland for Liverpool because she was an unmarried mother and she is not too enthusiastic about going back. Paul’s childhood friend Emlyn, who was like a son to Hazel, has perished in the flames. As Paul realises how much Skelmersdale has changed over the years, the play begins to move back in time.

Skelmersdale was one of the great new housing projects of the 1960s, meaning to get families out of the overcrowded Liverpool slums, Hazel was sent to the “ugliest house” of the lot. Although both Paul and Emlyn come from difficult backgrounds with Hazel being a single mother struggling to make ends meet, Emlyn is worse off – he is an orphan who has been brought up in care and by foster parents. Hazel treats Emlyn like her own child because he is Paul’s best friend. The rather shy and timid Paul admires the daring and adventurous Emlyn. Whilst both boys still enjoy the sunny years of their childhood, Hazel treats them to a holiday in Rhyl. It is here where a violent incident with their Skelmersdale neighbour Bob starts Emlyn’s downward spiral into addiction and self-destruction.

Although Emlyn is the more troubled character, graduating from sniffing lighter fluid and glue to harder drugs, he often appears happier and more fulfilled than Paul, who has a successful career in IT and a family in Dublin. Emlyn becomes Hazel’s substitute son after Paul’s move to Dublin, and he seems as dependent on that love as on his drugs. Paul, however, shuns all familial ties, refusing to see Hazel when he happens to be in England. When Emlyn has his first exhibition as an artist, Paul is still proud of him, flying over from Dublin to witness his friend’s success. Yet when he tries to bulldoze Emlyn into returning to Dublin with him and Emlyn refuses, their relationship turns sour.

The play is like a puzzle whose parts come together in the course of the performance as the author goes back in time. Michael McLean’s writing is precise and unsentimental and the production is sensitively directed by Amelia Sears. Miranda Foster is outstanding as Hazel, a kind and generous woman despite her hardships, and Bryan Dick impresses as Emlyn as he turns from a human wreck to a young man who is full of energy and life despite all his troubles and finally to a care free boy of 11. His character starkly contrasts with Mark Rice-Oxley‘s portrayal of Paul, a reserved and ambitious man who used to be a timid child. John Biggins is very good as Bob, a bigot who treats all Scousers with disdain as he sees them as juvenile delinquents who think nothing of defacing a picture of HM the Queen.

Polly Sullivan‘s set of concrete brutalism painted in burnt colours echo Emlyn’s artwork. Video projections of news and music clips locate the scenes in their time, which is effective but not actually necessary. 4/5

Years of Sunlight is currently showing at Theatre503 until Saturday 18th February 2017. For more information on the production, visit here…