Dance is one of my favourite things to watch. Having been a dancer and now a dance teacher, I fully appreciate the art form and how powerful it can be. I had no idea what to expect from this show and I am in absolute awe the entire time. It is such a surprise to be watching a dance work focusing around same sex relationships. The piece follows the lives of three couples; a lesbian couple, a heterosexual partnership and the love triangle of three men. 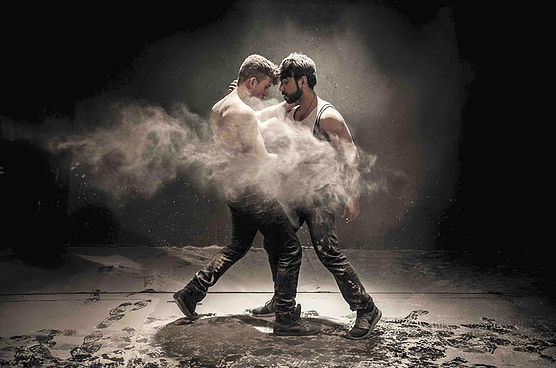 The opening ensemble piece is strong, slick and fast. The timing is impeccable and I can feel the energy radiating from each individual dancer on the stage. I am drawn in from the first beat, the passion and drive is intense. The performance is then split into solo, duet and group work. Whilst every single dancer on that stage is powerful, Michaela Cisarikova is utterly beguiling. The way she dances and tells a story is quite remarkable. You can literally feel it oozing from her.

I love the simplicity of some elements. A duet between two female characters, depicting their first romantic encounter is both funny and emotional. The sense of belonging, fear, self-esteem and uncertainty is beautifully told. All performed in a small space, using a mattress, it is simple yet powerful.

The music is a combination of power, strength and lyrical beauty. It feels like each piece is written for the performance, the two complement each other perfectly. Daughter, an Indie folk band from the UK, have now become one of my go-to Spotify playlists whilst I’m writing.

Andrea Walker, choreographer and creative director, and the talent behind this stunning choreography is a force to be reckoned with. Smother is an absolutely fantastic piece, and one that I wouldn’t hesitate to show my students as part of their dance qualifications if it ever became available for film. Dealing with addiction, obsession and commitment there are elements of it that anyone can relate to, whether directly or indirectly.

Never underestimate the power of dance. 5/5

Smother was shown at the Marlowe Theatre on Wednesday 8th February, however is currently on tour. For more information on the production, visit here…