Cycling has to be one of the most physically taxing sports to part take in. A sport up until recently deemed as being a humble discipline was unbelievably tarnished by the revelations of the most outrageous and elaborate scandal to have taken place in sport. Tom Barnes and Alexander Gatehouse also known as 2Magpies Theatre Company celebrate a golden moment in cycling history prior to the recent scandal as they zone in on the legendary rivalry between Lance Armstrong and Marco Pantani during the Tour De France on 13th July 2000. 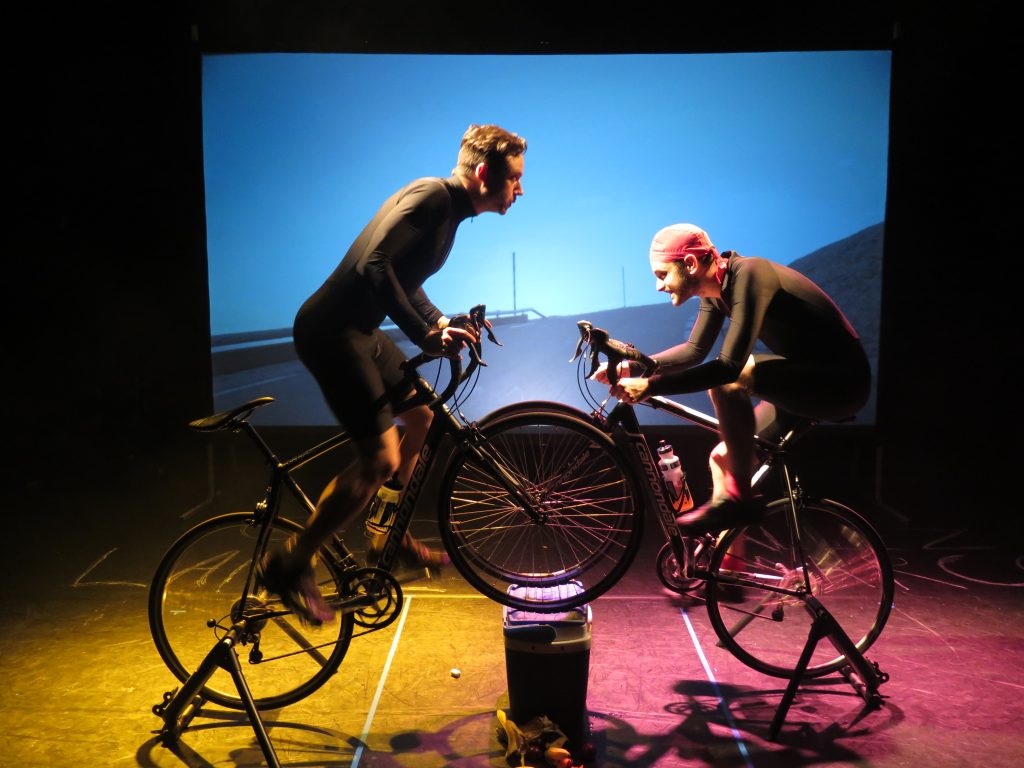 Mont Ventoux, located in Southern France translates as ‘windy’- due to its unforgivable windy summit. The road is notorious for regular closures due to its harsh climate, however has been the backdrop to several Tour De France stages. Mont Ventoux is not only a location but a silent character with many a secret. It’s claimed lives, witnessed rivalries, witnessed camaraderie, witnessed victory, witnessed loss and that’s powerful and could be empathised more.

2Magpies Ventoux doesn’t look to create poor imitations of these sporting giants, rather it encapsulates their spirit. Although initially jarring, this is a welcomed convention. Barnes (Lance Armstrong) and Gatehouse (Marco Pantani) deliver key facts, thoughts and feelings via storytelling. It’s a game of two halves as certain facts pack a punch, however the audience are never truly treated to well rounded human beings. Considering the masses of headlines written about these two, there is a yearning to dig deeper and gain a better understanding of who they truly are.

Before the evening begins, the stage is set for competition. Two bikes proudly stake their claim centre stage as Barnes and Gatehouse hype themselves up alongside heart thumping music. This excitedly gears up the audience for an evening of heart stopping competition however the evening never truly maintains that excitement. Although the evening is an examination of their rivalry, scenes of the 2 cycling have the potential to be dynamic and riveting.

The world knows about Armstrong, the evening reminds audiences of Armstrong’s incredible legacy and there’s a feeling of disappointment as we all know how his career ends up. In this competition of narrative, Armstrong wins hands down, Pantani merely a footnote. The show makes you wonder what if? What if Pantani were the greatest? What if Armstrong was revealed to be a drug cheat earlier on? This ‘what if’ is chilling and tragic but Pantani’s accomplishment of winning the Mont Ventoux stage in 2000 needs more weight, I want to really gauge why Pantani is important within the sport.

Mad Adam Films bring the unforgiving climes of Mont Ventoux to the Vaults; real life footage of the ascent giving the performers a real purpose and helping audience members not familiar with the setting to grasp these sports star’s reality. Matt Wills directs an ambitious piece of work, intertwining competition, Armstrong’a epic fall from grace and Pantani’s tragic end. What Ventoux does well is to immerse those knowledgable and not so into a world that both the performers are passionate about and I leave wanting to find out more about a silent hero-Pantani. 3.5/5

Ventoux is currently showing at The Vaults as part of this year’s Vaults Festival until Sunday 19th February. To find out more about the production, visit here…

« Previous post
The Bear @ The Bristol Old Vic Review
Next post »
Win tickets to The Cherry Orchard @ The Arcola Theatre!