To mark the centenary of the Russian Revolution; a revolution ousting out the overruling class, the Arcola Theatre have curated a season of productions creating revolutions in their own right. Celebrated British Nigerian playwright Oladipo Agboluaje presents Greatness Ogholi, an aspiring party leader looking to shatter the illusion of what Nigerian politics might be deemed as being, and instead places a human face on it. New Nigerians is a case of battling to retain as much as oneself as possible without caving into the demands of others looking impose their own ideals in a coalition. 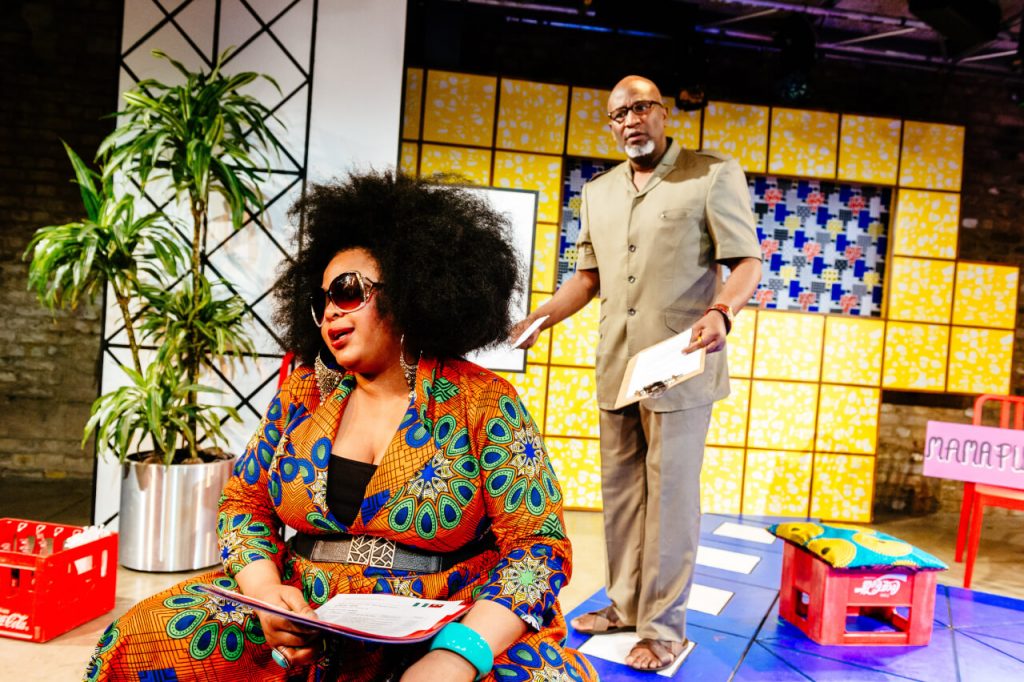 The evening’s success hinges on the motivations of the characters involved. New Nigerians, rather than focusing solely on the protagonist’s campaign trail, delves into the informal meetings he has in order to form the right coalition for his party to stand a chance of causing a ruction to the current ruling party. Agboluaje’s script endearingly etches out Greatness Ogholi as a genuine human being. Yes this man’s world is ruled by politics, but this script is careful not to become mechanical and carve him out as being an emotionless machine. Speeches are the silent buzz word of the evening, Agboluaje’s script gives permission to the cast to express their motivations through reems of text. This Nigerian convention welcomes the audience to delve into the world of Nigerian politics from the eyes of an underdog.

Patrice Naiambana delivers a masterclass in how to marry text with an effortless performance. It’s rare that a performer truly inhabits their character’s nuances and indiosyncracies however Naiambana does this with such ease. Naiambana oozes such charisma, he in turn without fail has the audience onboard his perilous campaign trail. Gbemisola Ikumelo as Chinasa Umezurike is vibrant, care free and self assured. Aspiring Vice President and rightful aide to Greatness Ogholi, in the political arena, Chinasa would usually be a silent figure that you’d perhaps always see it never hear. Agboluaje ensures that this production lends her a voice and a platform to be heard and seen at work.

Tunde Euba is quick and considered as both Danladi Musa and Comrade Edobor, two party leaders Greatness Ogholi reluctantly hopes to form a coalition with. The evening is a slow burner, a character study observing those that look to shape a nation’s policies. The word ‘politics’ is a loaded word, it can be guaranteed that if anyone is to play word association, the word ‘human’ may not necessarily arise immediately. Agboluaje depicts the many meals and meetings had behind the scenes, he depicts a war of ideals and personalities in order for the ‘best policies’ to be implemented. ‘Politics’ as it were is broken down into the everyday interactions rather than the national and global. Rosamund Hutt directs a comical yet sustained evening. It’s evident Hutt allows an artistic freedom as Greatness Ogholi expertly interacts with latecomers, often rallying them to join his political party. The cast multi role and this on quite a few occasions causes confusion.

Jemima Robinson‘s geometric stage design, although small grips the audience. Colourful Nigerian materials and square tiling become a versatile playing field, with the cast changing scene with a mere placement of a table or chairs. New Nigerians is light considering the topic at hand, it’s a case of the intrinsic triumphing over the extrinsic. People become politicians not robots… or am I wrong? 3.5/5

New Nigerians is currently showing at the Arcola Theatre until Saturday 11th March. For more information on the production, visit here..