A crisp and stylish stage forms the backdrop of Simon Godwin’s production of Twelfth Night. The modernity though a little unexpected is not surprising, considering the National Theatre’s recent stage designs (Hedda Gabler, Us/Them), minimalist yet effective for the most part. 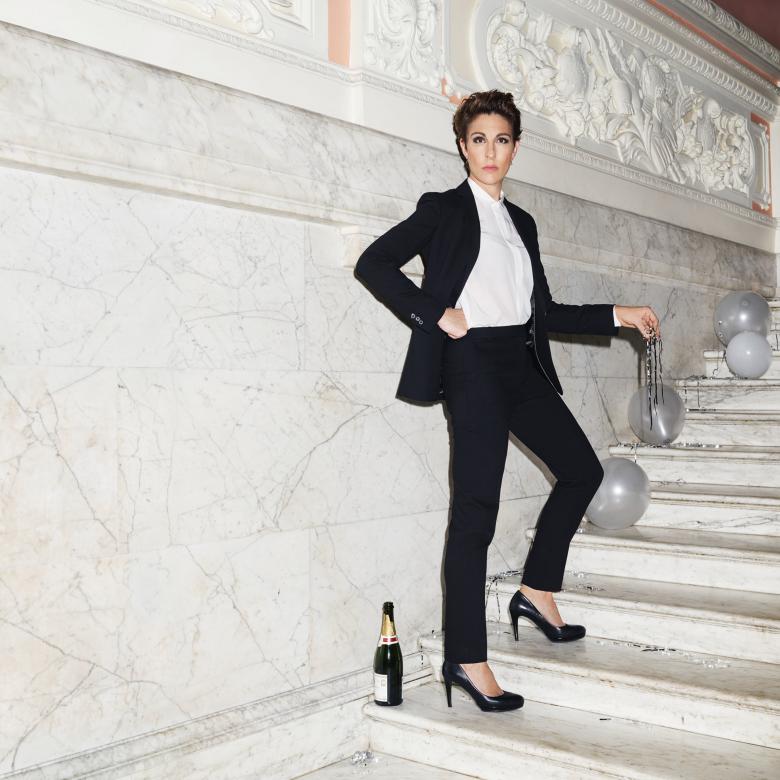 Courtesy of The National Theatre.

In the opening scenes we meet Sir Toby and Sir Andrew, both dressed in arresting attire, Wolf of Wall Street meets pastel chic. Several man buns also grace the stage, Soutra Gilmour’s injection of modernity is refreshing and does not feel forced. Tim McMullan makes a comical drunken aristocrat as Sir Toby, his comrade Daniel Rigby is equally if not more humorous as the sidelined Sir Andrew, who is unable to garner Sir Toby’s niece’s affections. Scenes of slapstick comedy are threaded through out the production but they keep in line with the show’s modern revival, Godwin tries not to go over the top with exaggerated jesting.

Tamara Lawrence plays Viola, who begins by adopting her brother’s identity, presumed dead. She then assumes the identity of Cesario, a member of Duke Orsino’s court. Lawrence acts very well, her delivery of dialogue is on point and her one-sided courtship with Olivia, played by Phoebe Fox is entertaining. Fox is great, humorous and a good actor, her monologues are well delivered.
Tamsin Greig has dazzling a dazzling presence as Malvolia, steward to her mistress Olivia. Greig’s facial expressions are sublime as is her dialogue delivery; she takes the role and successfully makes it her own. Her comedy skills are. second to none, and she is a joy to watch. A great scene enfolds when Malvolia scolds the drunken antics of Sir Andrew and Sir Toby alongside Feste. Her tone of voice reeks with disdain and superiority – ‘no respect of place, persons, nor time’ and it is fantastic.

The stage is cleverly crafted, it adapts naturally to the scenes, although at times stage technicians are present on stage but that is not too disruptive. It is  a well thought out and picturesque set; the dinner table set up in pastel shades is pleasing to the eye and very much reminiscent of summer evenings spent outdoors. The clarinet player is good and the band is okay, but at times feels like they are playing lobby music, especially between scene changes. Feste sings very well, Doon Mackichan has a soulful and piercing voice, her character is great and also two sided, the jester and the forlorn singer. Maria as Olivia’s lady’s maid is well performed by Niky Wardley.

The character of Malvolia is depicted as a lady in this production, another reversal of identities, it is good to see a lesbian character on stage. Godwin’s production appears somewhat diverse, featuring a singer in drag in the second half, at the Elephant Club, who has a beautiful voice. Due to Olivia’s entourage, at times the stage is predominantly filled with female characters, a great reversal from Shakespeare’s times, and one for the better.
Malvolia hints that perhaps everyone is trying to climb the social ladder, which makes her torment by Sir Toby and Feste even more distressing. The ladder is a metaphor that is used at the end of the show, as a soaked Greig climbs the steps alone. Amidst scenes of marriage proposals and sibling reunions Malvolia says ‘I’ll be revenged’, suggesting all is not as jolly as it seems and thus taking an uncharacteristically serious tone at the end. Malvolia is perhaps intended as one of the more central characters, despite the story being fundamentally based around swapped and mistaken identities.

All the cast give great performances, despite an occasional fluff-up of lines here and there. Tamsin Greig steals the show with her spectacular Malvolia; she is charismatic and captivating in this comic role.
On a side note, there is an overwhelmingly white audience at this evening’s performance. Shakespeare’s work is perhaps still not as accessible as it should be to a more diverse audience. We may have brought more diversity to the stage but as such, it does not seem to have reached the audiences. 4/5

Twelfth Night is currently showing at the National Theatre until Saturday 13th May. For more information on the production, visit here…