Throughout history there’s been an us/them divide in regards to Royalty and society. A mystique, a controlled narrative dictated by artworks and carefully edited soundbites and written resources. Subika Anwar-Khan chips down at this carefully constructed facade to delight audiences with Princess Sophia Duleep Singh’s Story. 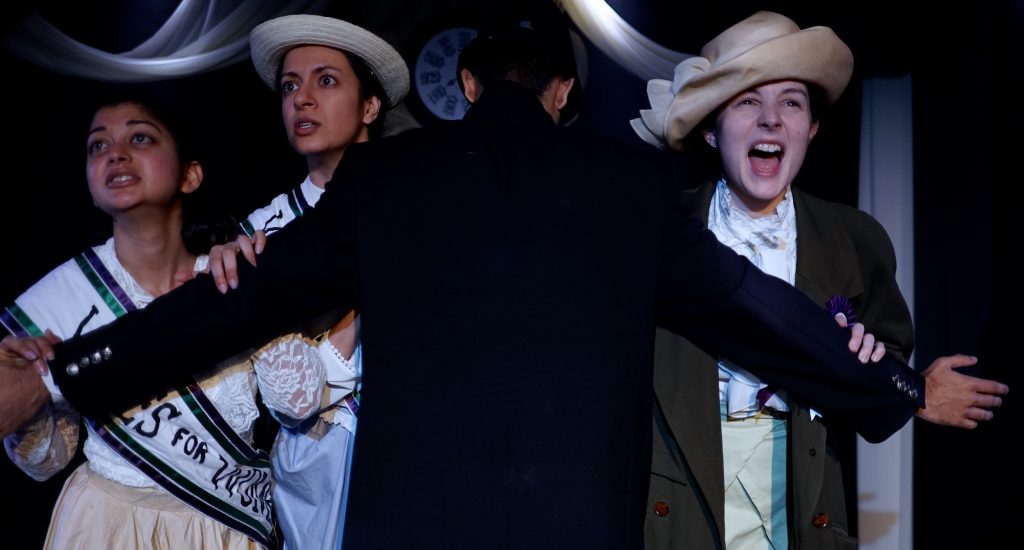 Princess Sophia Duleep’s story in Princess Suffragette spans a century from the 1800s-1900s and what’s startling is this production’s relevance. Born to an exiled Maharaja, Princess Sophia is apart of a new generation of Britons, assimilating not only within a new culture but within the higher echelons within society whereby a foot can not be put wrong. Anyone of a diaspora I’m sure at some point has questioned their identity, and it’s clear Princess Suffragette regards this as a crucial topic to delve into further.

Anwar-Khan celebrates not only Princess Sophia’s heroism; she is mindful to acknowledge those who were there to support her on her journey to becoming a significant  figure. This is admirable; however can occasionally cause confusion due to breadth of characters referenced to. Princess Suffragette‘s relevance taps into, or should I say presents the beginnings of the feminist movement. What’s great is the conversation currently happening within theatre challenging the variety of female voices on display. Many of us are aware of Emmeline Pankhurst’s legacy, however there were many other women who also fought for various rights for females such as the vote. Princess Suffragette presents the first British Asian Suffragette and the legacy she has left behind.

Jessica Andrade‘s interpretation of this revolutionary princess is quaint. She’s careful to present a young, confident female, continually questioning and challenging her role within society. Avita Jay emits a subtle yet courageous turn as Princess Sophia’s mother, a revolutionary showcasing a fearless nature that runs throughout the evening. Megan McKie-Smith elegantly transforms from Princess Sophia’s maid, a woman happy to remain in the background to a no nonsense Emmeline Pankhurst, a figure we all know was relentless in campaigning for women’s rights. The evening has a strong air of female solidarity, however Navinder Bhatti compliments the cast, taking on the role of Princess Sophia’s love interest. He also offers a stark reminder of the harsh realities of a patriarchal system adament in stopping the rise of the female voice as his turn as a police officer.

Charlie Ely captures the feeling of being of the diaspora, ensuring colonial wooden furniture and Indian inspired drapes set the scene. Scenes changes take on mini narratives themselves, beautifully choreographed sequences move the production along swiftly and smoothly. Ely respects Anwar-Khan’s wish to cover a century of history, this in turn highlights Anwar-Khan’s ambition but tackles so much that there’s a lot of information to digest.

Princess Suffragette is an eye opener; it contributes positively to the spectrum of stories referring to the Suffragette movement. Many of the Suffragette protests from the perspective of Emmeline Pankhurst are well known, Princess Sophia’s extraordinary story I’m sure will enjoy success as it taps into the zeitgeist of feminism and cultural heritage. 3.5/5