My Country; A Work in Progress @ The National Theatre Review

I My Country; A Work In Progress is a collaborative piece between the current Artistic Director of the National Theatre, Rufus Norris and Poet Laureate, Carol Ann Duffy. During 80 minutes or so, real testimonials from residents across Great Britain are interwoven with speeches from party leaders prior to the referendum on the UK on leaving the European Union. 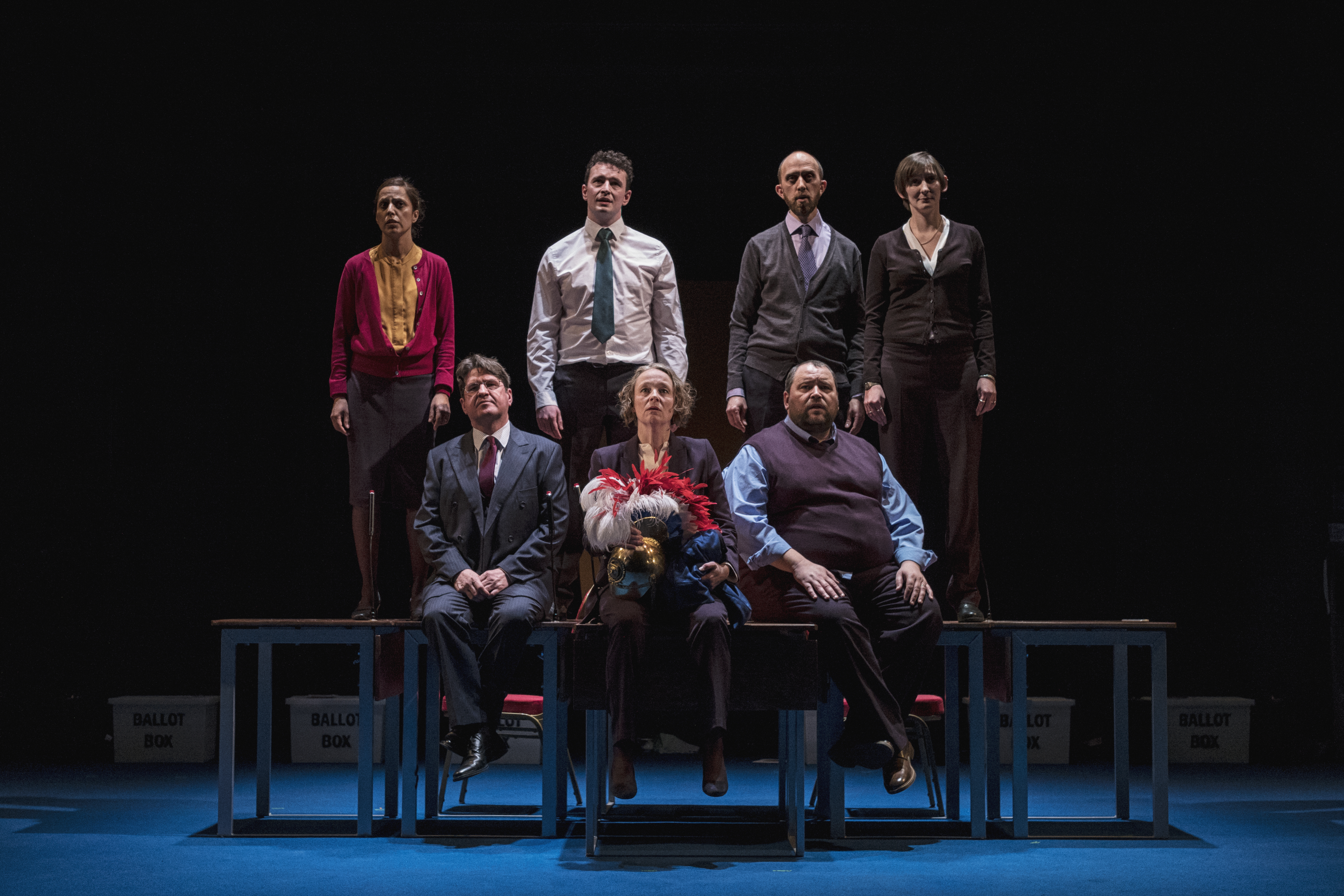 Photo courtesy of the National Theatre.

Opinions of locals have been gathered from six broad regions of the UK and shared by six representatives in a meeting held by Britannia. Her counterparts are Cymru, Caledonia, Northern Ireland, North East, South West and East Midlands whilst Britannia, represents Westminster and she recounts speeches from various politicians. The general consensus in the build-up to the referendum is presented by the representatives who recount verbatim testimonials, whilst holding up photographs of those interviewed. Nonetheless, a lack of representation of London or South East region is a curious concern.

The first half seems a little lack lustre, as despite the testimonials being read well, the play feels disengaged and a little monotonous, the symbolism does translate with Britannia’s constant reminders to listen to what is being said across the regions by the locals. The increasing disparity between Westminster and the lesser affluent regions of the UK such as the Midlands or North East for example, are evident through the testimonials. There’s an interesting moment, when Seema Bowri (East Midlands) speaks about a man who said many immigrants believed the UK was the land of ‘milk and honey’ but whilst you can buy both items for a pound, the land itself is neither. Later when the conversation turns to immigration, it becomes more engaging but the play falls short of culminating into something meaningful.

The play often relys on stereotypical humour, which receives regular laughs but for the most part seems in poor taste. The actors on the other hand are excellent; each play their part with gusto and aplomb. The script however seems too focused on ensuring they act out their regional stereotypes, which leads to a trite scene where the representatives sit to break bread, then break out in song. Furthermore, Penny Layden’s (Britannia) imitations of pro-Leave politicians such as Nigel Farage and Boris Johnson again feel a little commonplace, perhaps humour cannot always be successfully interspersed with a topic as serious as leaving the EU.

Whilst the focus is on people and their viewpoints, key components are missing form the story. The lack of representation from the capital for example, by only focusing on Westminster and its sentiments (though they were pro-Remain at the time), the play side-lines what Londoners feel, perhaps due to London being such a multicultural city, who did vote to remain in the EU. The testimonials therefore feel a little biased, in favour of what leave voters opined.

My Country is a decent effort from Norris and Duffy, yet it leaves a lot to be desired. It feels unhinged, a little misrepresentative of the whole nation and unfortunately does not do justice to the pivotal referendum.  3/5

My Country; A Work in Progress is currently showing at the National Theatre until Wednesday 22nd March. For the review, visit here…