Camille’s return to Brighton is met with some real excitement. She’s performed here many times to rapturous reception, and nothing less would suffice for the ‘Queen’ of Edinburgh Fringe and someone of such serious talent. She’s often described as a cabaret performer, but her shows are more than cabaret, taking songs by artists such Nick Cave, Brel, Bowie, Tom Waites and transforming them, telling those stories in her own unique way. 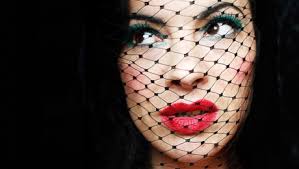 It’s a rollercoaster of a couple of hours, with the songs broken up with a fair amount of silliness from Camille – meowing at the audience, leaping around like a rabbit, telling us about how she first heard some of these artists, and how her family helped shape her musical influences. The long introduction to Waites’ ‘Misery is the River’ sees her dancing about with a cardboard pig’s head on, and I wonder how she can continue at this pace with this much energy for such an impressively long set night after night. ‘If you haven’t seen me before… Good luck’, she quips a few numbers in.

The costume changes come naturally throughout, except perhaps for the wonderful cape full of fairy lights not quite behaving itself. On the whole, the changes in attire, the addition of a hat, the lit up umbrella, various different capes over her cat suit, add to the experience of her embodying a different character with each song. It’s chaotic at times, her chair goes flying, followed quickly by her wine glass (a plastic cup with a very satisfying sound effect of a glass smashing) but rather than distract from proceedings, all this just means we’re kept on our toes even more so than the songs already ensure. The set, too, is all festoon lights, carnival and glitter balls, reminding us of the ‘Carny Dream’ title of her current tour.
The band are brilliant, and I particularly enjoye the addition of Charlotte Glasson to the ensemble playing, at various times, the saw, violin and saxophone, but I have to say, the highlights are the softer songs, the ones with clear lyrics sung with such intense feeling by Camille, drawing us into the story and her world. The loud, rocking ones, like Dylan’s ‘Simple Twist of Fate’ really do pack a punch, and I haven’t ever heard anyone live with a voice quite this exceptional, but it is at it’s very best when it’s controlled and softer. An acapella ‘Amsterdam’ and the two Nick Cave numbers – ‘Into my Arms’ and ‘Ship Song’ are perfect numbers to showcase her extraordinary voice. I’d challenge anyone not to get a tear in their eye during her beautiful rendition of Dillie Keen’s ‘Look Mummy, No Hands’.
David Bowie has been one of her greatest influences, like many other performers, of course, but her take on his songs is like no-one else. ‘Where are we now?’ had some audience members around us in floods of tears, before ramping it up with a storming ‘All the Young Dudes’ and finishing with my all time favourite (hers too, it seems) ‘Five Years’.
She receives a lengthy and much deserved standing ovation from the packed house at the end of this exhausting evening, and one suspects she receives this everywhere she goes. 5/5

Camille O’Sullivan performed at the Theatre Royal Brighton on Sunday 19th March. To find out more about her other tour dates, visit here…

« Previous post
Run @ The Bunker Review
Next post »
My Country; A Work in Progress @ The National Theatre Review