‘Run. I fall. And run. I fall. With sheer force that I hurtle through space.’ The expanse of human memories in space and time is what Stephen Laughton plays with in his latest one-hander Run, at newly established off-West End venue The Bunker. 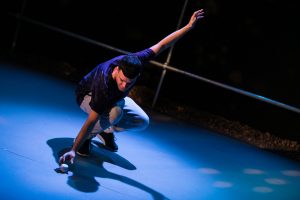 Enter Yonni (Tom Ross-Williams) a 17 year old Jewish Londoner who recounts an unforgettable summer of rebellion, self discovery, shabbat and sex. We see a distinctively youthful eye of the world around us as Yonni takes us with him to what seems like the beginning of time, the time he first met Adam. Adam is the intelligent, experienced lover we’ve all fallen in lust with, he fascinates Yonni with stories of Venus, distant galaxies and beached whales, and with it the audience are intertwined with their relationship.

Run is more than just a play about a gay love story, it is fresh, sharp and essential to British theatre. Putting unheard, complex stories at the forefront, Laughton and director Lucy Wray hit it spot on discussing the intersectional issues faced by LGBT Jewish people. Poetic in it’s approach, Laughton’s writing is punchy, sexy with a spoken word spirit that charges through the confusing emotions of adolesence. Yonni not only battles the breakdown of his dysfunctional family, he’s also battling the raw emotions of falling in love for the first time.

Ross-Williams is an energetic force on stage bringing focus and heartfelt understanding to the character of Yonni. An almost bare set with imposing scaffolding towering upstage provides ample space for Ross-Williams to contort and throw his body rhythmically to physically draw out the contours of Yonni’s development from boy to man. Manhood is what anchors the play making Ross-Williams, with a wealth of experience in discussing the toxicity of masculinity, an obvious choice for the leading role. Whether it’s Yonni’s father’s distant and brutish approach to being head of the household, or the archaic Rabbi Bloome’s attitude to finding the pair lying in bed together at ‘Jew camp’, all of these instances bubble away at Yonni until it reaches a climactic melting point of anger and repressed rage during the final act.

It’s a hard task for any actor to hold the stamina to perform an hour long monologue of this calibre but Ross-Williams achieves this with such rigour he leaves the audience hooked, it is easy to see why he’s an up-and-coming star of the stage. Run, hurls us through the interconnect complexities of life, love and loss, blending strict religious practice against a backdrop of urban London. The structure plots a narrative that at first seems chaotic, until the pieces align and we are left with a map that forms a constellation like pattern of the shared beauty between two lovers.
We are left with the image of Yonni circling the stage as he mutters the phrase ‘I notice how…how flawless Venus’ orbit is’ and a galaxy of love stories eclipse the stage in to an inky blackness.  4/5

Run is currently showing at The Bunker Theatre until Saturday 1st April. For more information on the production, visit here…