Lauded for his visually stunning features, Tarsem Singh has pushed the boundaries in regards to how audiences are challenged on a creative level. The Fall (2006) marks the director’s second feature film, after the much talked about ‘The Cell’ (2002); seeking inspiration from celebrated Bulgarian writer, Valeri Petrov‘s film Yo Ho Ho. Intertwining spectacle with dark themes, EmpathEyes present a theatrical telling of the cult classic. 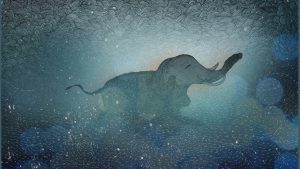 The 40 minute theatrical re-telling takes place in a hospital ward. Robert Rowe is not only the evening’s protagonist (Roy), but a storyteller also. His voice a commanding presence which calms and informs. After an attempted suicide, Roy deals with the repercussions the only way he can, by delving into the world of his very own stories. The Fall subtly champions the power of the ‘story’. We’re often taught that tales are reserved for our youth however a powerful tale can relate to all and withstand the test of time. It can help anyone of any age escape their troubles, showcasing a story’s subtle power to heal.

Keira Jozana steals the show as a young patient enthralled by our protagonist’s stories. EmpathEyes geniusly project Jozana onto a screen, with every reaction, response, movement and moment meticulously considered, and this pays off. I watch thinking that this is the future of theatre; a cinematic/theatrical hybrid that is magical, and this is exciting. Freddee S Lewis, Andreea Stan, Diana Garcia and Cecilia Lu animate our protagonist’s world beautifully. Video projections mould the evening’s identity. The audience are projected Roy’s and the young patient’s reality, a presentation of Roy’s anguish and depression.

The animations are so bold that Roy’s reality is swamped by this. There’s a feeling of Roy despising his current situation however this could be weightier. There’s room for a true human connection to take place, however the piece falls short of this. The convention of linking everyday conversations with the elaborate nature of the video projections is a welcomed one, the young patient and Roy’s friendship is endearing, especially due to the young patient not physically being on stage. Max Wilson‘s compositions and musical direction flourishes the production with a grand and elaborate energy. From the production’s beginning up until it’s very end, Max Wilson, Ruth Wilson, Fifi, Rafael Bolivar and Imogen Lewis work wonderfully together to create that cinematic/theatrical hybrid. A creative evening clinging onto Tarsem Singh’s vision. 3.5/5

The Fall was shown at Bay 56 Theatre From Friday 17th until Sunday 19th March. For more information on EmpathEyes, visit here…