Discord and disconnect run deep in the veins of Boundless Theatre’s comprehensive and sharp Natives at the Southwark Playhouse. Director Rob Drummer stages the piece wonderfully on a traverse stage that comes alive with Cate Blanchard’s humorous and often chilling video projections. 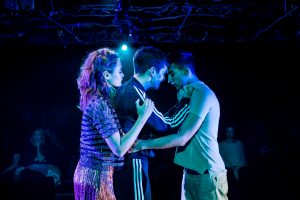 Enter the Natives, three fresh faced teenagers who all look like they’ve come from a fashion shoot for an edgy magazine. Aesthetically, the piece chimes with the attitudes of the ever self aware generation that it is aimed at, glossy and on trend which is probably what writer Glenn Waldron would have imagined, given his background as former Editor of i-D magazine.

This three hander is a series of monologues depicting the lives of three 14 year olds in totally different parts of the world. Like every generation before them they are struggling to come to terms with growing up, discovering themselves and losing their childhood innocence. However, these are Gen Z teenagers, battling the complexities and intricacies of growing up in a world where validation, terrorism and pornography are just one click away.

Natives holds nothing back, the tension is palpable, the narratives are raw and the rhythm of the piece is skilfully orchestrated. We sympathise with and criticise the characters in equal measure, emphasising the hypocrisy in the way we scrutinise the so called ‘selfie’ generation. The characters are anonymous literally and figuratively, lost in a world where the adults are absent figures which has devastating impacts on the mental health of the trio.

Battling for a higher position in the social pyramid amongst her well connected and well heeled peers, Character A (Ella Purnell) is challenged to face her friends and her conscious at Lily Kwok’s Funky Fourteenth Birthday Dance, the only party wannabe instafamous girls should be seen at. Purnell captures the fragility and loneliness of adolescence beautifully and competently drives the narrative to it’s darkest depths.

Fionn Whitehead balances the comedy and virility of male youth culture as the gritty and brutish Character B. Delivering his monologue with red-blooded spirit Whitehead’s portrayal of B seems the most poetically honest of all three. Whitehead captures the essence of a generation of males lost to bravado, depression and chronic sexual addiction.

Character C (Manish Gandhi) offers us a contrast and is the intelligent thread of the piece. Gandhi bounces around stage bringing a geeky charm to the bleakly depressing reality of living in a war torn country. Asking ‘where are the grown-ups to do something?’ to which a thud of responsibility comes crashing down over the audience and the reality sets in. We, the adults are absent, severing the ties we have with a generation who seem to be our only hope.

Every secondary school Drama teacher needs to read this play. Boundless Theatre is making work for teenagers that is exciting and original, stripping theatre for education of all its cliches and instead opening up the guts of reality. The movement sequences (choreographed by John Ross) and imagery of the play become ingrained like a constant looping viral video, there is no escape but there is hope. 5/5

Natives is currently showing at the Southwark Playhouse until Saturday 22nd April 2017. For more information on the production, visit here…