Certain events within recent British history have really helped to shape our understanding of just how much race can effect daily interactions. We only have to look back to the Brixton Riots in 1981 a response to tension between the Metropolitan Police and the Black community and the more recent London riots of 2011 sparked by the death of Mark Duggan to grasp just how detrimental an issue racial profiling is. Drawing from his own experiences with the Police, Urbain Wolf‘s Custody depicts the pieces in which a family have to place back together following the loss of their son/brother/boyfriend; a young black male who suspiciously loses his life whilst imprisoned in a police cell. 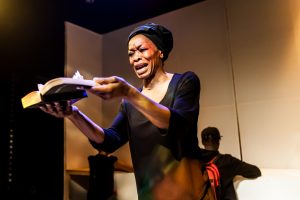 Wolf sets out to build a multi-faceted narrative, a young black male still living through the anecdotes re-told by his now grieving family. The evening’s strong female presence reminds the audience of just how prevalent the female voice becomes during these times of distress; the mother often times becoming the spokesperson as the media circus capitalise on the heartbreak. Wolf temporarily explores this, but could be examined further.

Tom Wainwrights‘s script moves between the lyrical and political, “There was a bit of a scuffle, and I’m sorry to say, he passed away” sets the tone initially for the performance. The cast perform this in chorus both in unison and staggered; leaving the audience intrigued. The political takes shape via the speeches of Kiké Brimah‘s role of the younger sister. Fuelled by the blatant injustice causing the death of her late older brother, she’s driven to beat the system and change the already falsified script the national press appear to mould. She is a character often anchoring this grieving family together, and this avenue is a missed opportunity to learn about the emotional and technical aspects of taking on such a battle as proving wrong doing within the police force.

Wolf and Wainwright want to depict the ripple effect a traumatising event has on a family, Urban Wolf portrays a younger brother angry at the fact that he was always been under the shadow of his older sibling, Karlina Grace-Paseda‘s matriarchal role contends with denial and having to bring up 2 strong minded teens and Sacharissa Claxton battles to even has her voice heard as the widowed fiancé. This family dynamic within itself is wafer thin, this basis has the makings for a riveting show within itself, however these characters need a more focused narrative to help the audience empathise with them.

Phil Newman‘s set design artistically reminds the audience of the elder sibling’s presence, a cut out of a face prominent centre stage becomes the doorway and picture frame containing the cast onstage. The versatile stage later unveils a clinical prison cell; multiple large white square tiles telling a visually story of loneliness, distress and injustice as we are left to imagine the last moments of this man’s life. Wolf’s production is incredibly responsive, we are living in an era where social ills are starting to be recorded visually, this production however tmisses highlighting who this individual was.  He is referenced to, and the manner in which he has lost his life is also referrred to, however I still leave wanting to know more about who he was and witness a snapshot of the day in question leading up to the sad loss. Gbemisola Ikumelo‘s understanding of the ensemble is prevalent in this production, the cast are a unit rather than individual beings. Her convention of the cast wandering around the space, interweaving as if a living jigsaw puzzle depicts life ever moving no matter what. This show is ambitious, it attempts to tie together an array of themes but needs a focus. 3/5

Custody is showing at the Ovalhouse Theatre until Saturday 8th April. For more information on the production, visit here…