Tez Ilyas wants to make you laugh, and the audience does, for the most part. His walk on song is Ni**as in Paris, you know the one? He recounts an awkward exchange with a DJ, trying to explain the song without saying the name…you know the really famous one with Jay Z and Kanye? He continues by making a quick jibe at Philip Hammond being out of his depth, yes quite. Then slips into a dance routine to the famous bhangra tune (you know the one), claiming the sequence was to show off his dance moves. Ilyas enjoys audience participation and these continue through the evening. The audience seem to enjoy it too; yet these interactions are as customary as you would expect them to be. 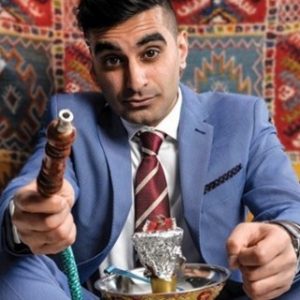 He describes his stints with Tinder, ‘that hot mess of a place’ he exclaims. He met a girl and they fell in love and are still together…but this is not what I signed up for he declares! This is one of the more naturally funny moments in the show. He floats in and out of discussing race and there are cultural references aplenty. An Asian kid with divorced parents, a fairly uncommon position to be in, back in the day, in fact rarer than a Western leader being charged for war crimes, he adds. The show makes many references to Brexit and the current political climate, but Ilyas’ nuggets of political references seem more an afterthought, and somewhat forced. More often than not he seems too conventional and lacks originality.

‘Any vegans in the house’ he asks? ‘No? Well they probably would have let us know by now!’ Cue further obedient laughter. Another crowd-pleaser or overused filler, depending on your viewpoint. Ilyas brings little that is new to such one-liners. He mentions a tendency amongst Asian people who get married and get fat, and there’s a joke in there somewhere. I have family in India; in fact I was born there, so perhaps a similar fate awaits me. Is that why I didn’t find this part funny? No. I didn’t find it funny because it really isn’t, not if you like your comedy a little less bland.

Ilyas is a crowd-pleaser; the audience laugh consistently through his pieces, for example his play on the acronym BNP, why the British National Pakistani of course. There are also parts more serious in tone, for example broaching the subject of people of colour having fewer roles in films and television. Another example is when he talks about sexism and misogyny, referring to the recent US presidential election: ‘Hilary can’t be President because she’s a woman.’ Ilyas adds depth to his performance when he delves into weightier subjects, a break from the more cliché aspects of his show allows his more serious sentiments to flicker through.

However, he does not feel like a natural performer and perhaps this overshadows Made in Britain, a show that otherwise has potential and is mostly well thought out, yet is lacking in original wit. 3/5

Tez Ilyas: Made in Britain was shown at Soho Theatre from Tuesday 21st-Saturday 25th March but is currently on tour. For dates, visit here…