Desiree has great stage presence. She is engaging and inviting, she wants you to listen to her piece and she isn’t holding back. Her mention of the earlier attack at Westminster is surprisingly in line with how I feel. She says her friends from the USA don’t get how London works, she has done the tourist Westminster thing once, that’s it. Now she lives in Zone something-billion and well, it’s basically Croydon. Having spent the day at home, in Zone 3, I feel much the same. 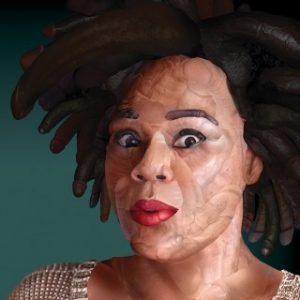 Her deft humour keeps the pace light as she glides into talking about her body. The ease, with which she talks about herself and her appearance, is refreshing. She recounts her experiences with ‘fat lady stores’ and with a thong for the larger sizes, she bought it of course but the shape-changing triangle was a no-no. She breezily makes references to race and colonialism yet it never feels forced. Desiree wants to present herself, and she does, just as she is.

“Oh and don’t ask a kid what they want to be when they grow up”, she says, “but ask what they want to change in the world when they grow up”, this brings children to the world with a sense of service and not one of entitlement. Poignancy weaves through humour; it is wonderful. Her research into science has led her to ponder what the world would be like if we acted as if we were not being watched… Burch is energetic and charming, she shows modernity and relevance in her performance. Some of the comedy is a little to the bone, perhaps the part on public diarrhea, not her best, but only because the more poignant pieces feel so elevated.

Evolution at 75 minutes in length, is a pretty long time to be talking, a stream of thoughts crafted into a cohesive monologue, Burch works it just like she works the audience, with aplomb. 4.5/5

Desiree Burch: This is Evolution was shown at Soho Theatre from Monday 20th-Wednesday 23rd March. Desiree will also perform on Thursday 11th-Friday 13th May 2017. For more information on the show, visit here…

« Previous post
Tez Ilyas: Made in Britain @ Soho Theatre Review
Next post »
An Evening With an Immigrant @ Stratford Circus Review