An Evening With an Immigrant @ Stratford Circus Review

Inua Ellams is a Nigerian born internationally touring poet, playwright, graphic designer and artist. A man with this many talents is bound to put on an interesting show. An Evening with an Immigrant is set up in a small intimate space which adds to the honesty of the show. This isn’t really a play; more an engaging and insightful conversation. 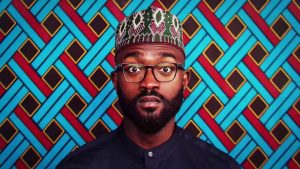 Ellams enters on stage in traditional Nigerian dress, and breaks the ice by conveying all stereotypes and jokes that this show is not going to be what you expect. Immediately the audience relax into the space. He engages with us directly and the house lights come up every time he speaks directly to us, the lights go down when he begins to resight a poem.

An Evening with an Immigrant is a personal conversation on Ellams’ pending status to becoming a British resident; he breaks down the flaws in the justice system and loops holes within the forever changing immigration policies. He starts by giving us an introduction to his parents, to gain an understanding on how and why his family came this country. His father got a great job and worked here for 5 years. It’s a struggle to hear that due to lost paper work, birth certificates, passports and I.D have led Ellams to live consistently on the edge; never being certain of his residency. Even when performing in the National Theatre and being at a drinks reception at Buckingham Palace, he was still technically an illegal immigrant. It’s frustrating to hear of all the hypocrisy and battles individuals are still going through everyday.

We hear stories of his continued travels from England, to Ireland to London and the effect of being the only black child through school to being one of many and still not fitting in. It’s refreshing to hear such personal stories and the poetry that stems from it, almost like he is giving us his process for how he releases any anguish. Ellams has so many reasons to be bitter but he is nothing but pleasant. He understands the political system and the social barriers that are put up by his mere appearance but embraces that and takes us on a journey of his life.

We grow close to Ellam almost as if we have gained a friend. If you are looking for a refreshing night out, inspiration or need some uplifting, this is a perfect night out for you. He gives us the inside perspective of what it is like the be the immigrant that we so often hear about. This is an important piece that not only informs the audience but gives us hope. 4/5

An Evening with an Immigrant was shown at Stratford Circus from Thursday 16th-Saturday 18th March. For more information on the tour, visit here…

« Previous post
Desiree Burch: This is Evolution @ Soho Theatre Review
Next post »
Apply to be apart of the Network of Independent Critics!