What’s great about the human experience is that no 2 characters are the same, similar to fingerprints. We all assume, we all judge a book by its cover and it’s inherent that we compartamentalise and stereotype. It can be seen as being an easier path to fit in and follow the crowd no matter how old you are, however Le Gateau Chocolat’s Black completely dismisses this notion and fiercly shines a beacon on self expression and being yourself. 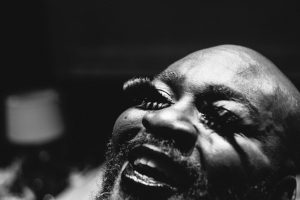 An evening like no other, Le Gateau Chocolat presents an autobiographical evening of defiance, humour, self deprication and hope. Taking his place centre stage behind an elevated canvas screen, Theatre Royal Stratford East melts away and Le Gateau’s whimsical world takes its place – thanks to his power as a storyteller. Black takes on the form of a mini Opera, Le Gateau’s life the subject of this tragi-comedy.  The mundane takes on a magical realm as Le Gateau, alongside the New Musical Ensemble‘s beautiful orchestral accompinament performs a programme of self penned arias and contemporary tracks.

The evening harks back to Le Gateau’s upbringing in Lagos, Nigeria; a pivotal time in his life as he began to defy expectation, challenging the expectations of his parents and society with his love for synchronised swimming and Opera singing. Teamed up with  Hanna/Barbera inspired animations, the evening’s vivid tone is set. This experimentation of form, often switching from reality to animation is a playful convention that gives the evening its signature. The narrative of Black successfully binds the evening’s validity. What’s apparent is how true to life this show is, no matter the grandiosity of everything else. There are themes touched upon delving into bullying, sexuality, weight and mental health making the evening relatable as they are universal.

The show is careful to not ponder on the same emotional level and therefore shifts from the poignant to the comical. A rendition of Whitney Houston’s I Want to Dance With Somebody takes on a power like never before as Le Gateau presents a stripped back version, every lyric given its moment. Tips on how to disguise one’s weight showcases Le Gateau’s self deprecating humour and his voice is a marvel, beautiful and show stealing. Joshua Carr‘s use of lighting, from creating the illusion of Le Gateau standing within a TV screen (as he stands behind a canvas) to making Le Gateau appear as if he is a silhouette is astounding.

A show with heart and imperative for today’s young generation to watch. 4/5

Black is currently showing at the Theatre Royal Stratford East until Saturday 8th April. For more information on the production, visit here…