Expensive Sh*t, written and directed by Adura Onashile, is notable for featuring an all black, all female cast, razor sharp writing, unique characterisation, and an absorbing, afrobeat tinged story, focusing on one of the 20th century’s most pioneering musicians, Fela Kuti, who established Afrobeat as an internationally renowned genre. 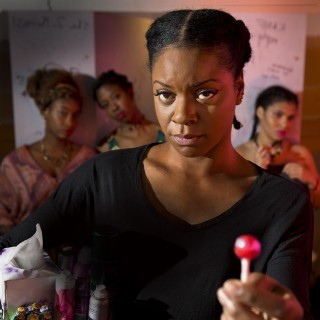 It is 1994 at The Shrine, Kuti’s club, that lies at the heart of Kalakuta, his home, and self-declared independent state in Lagos, Nigeria. Functioning as a sort of commune, the poor and dispossessed flock here with dreams, and little else, to attempt to be among the few to be selected to join his band as backing dancers. The reality, many find, is often a lot more dark and seedy than they’d imagine, with Fela Kuti presented as a dynamic and omnipresent, yet challenging person.

Tolu, played by Kiza Deen, leads her group of unnamed dancers with a fierce, no-nonsense determination. She will let nothing stop them from getting attention from Kuti, even if it’s the wrong kind of attention. Practicing from the club’s toilets, the onus is on her to make the right decisions, and look after the safety of her friends, who want fame and glory at any cost.

Fast forward 19 years to a 2013 Glasgow nightclub toilet, inspired by the city’s Shimmy Club (Spoiler alert- don’t Google the club!), Tolu’s dancing dreams have been firmly flushed, and she is reduced to cleaning toilets in a strange club, and a strange, foreign country, with a culture she doesn’t understand. Although tired, disempowered, and generally unacknowledged by punters, Tolu still acts the leader, and has a new set of young women to help out, but as the play oscillates between the two eras, and both stories unfold, it is clear that all is not right in both clubs. Tolu is caught up in both systems, with greater forces at work, and responsibilities that weigh down on her. Like in 1994, she once more has the opportunity to help out vulnerable and exploited women.

Expensive Shit only really comes into its own once the characters are firmly established, and a couple of twists are revealed, but overall is a fun and brave, celebration of feminity. 4/5

Expensive Sh*t is currently showing at the Soho Theatre until Saturday 22nd April. For more information on the production, visit here…