There are a couple of stand-out performances and some impressive dance numbers in this touring production, which is good fun but ultimately a bit unsatisfying. 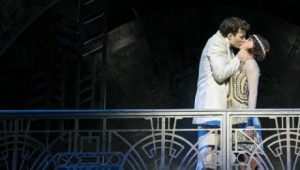 Joanne Clifton stars as Millie in this popular and lively musical, which is currently on its UK tour, and arrives in Brighton to a packed house of enthusiastic spectators.
It is good fun with some belting musical numbers, but the most exciting performances come from the characters I long to see more of. Lucas Rush as Mrs Meers is very funny – a frustrated performer who has turned to a life of crime, selling the girls staying in ‘her’ hotel into slavery, he sings one of the best numbers in the show, They Don’t Know, like a crazed, drag Norma Desmond. He’s a brilliant, naturally comic actor and the biggest laughs in the show come from his performance – It is consistently funny to hear him drop his voice when he is in private and fed up of pretending to be the kind female host to this group of young women, finding their way in New York.
There are a couple of scenes between him and his two Chinese speaking helpers Bun Foo and Ching Ho, where there is so much lost in translation and the language barrier is so laboured for so long, that I am not entirely sure how to react, but I enjoy watching him on stage at every moment.

The other stand out song, Only in New York comes from the New York singing legend Muzzy, played by Jenny Fitzpatrick. Her voice is incredible, powerful and beautiful – it’s that very special kind of memorable stage musical voice and I can happily listen to her sing for the duration of any show. Our leading lady is a fantastic dancer, however the songs seem to stretch her vocals and I’m not sure if she is entirely comfortable in a role that demands so much from the actor in terms of the singing. That said, the ensemble pieces are wonderful and she is captivating to watch when she is dancing. The set is clever and adapted perfectly to the Brighton stage, with a striking Statue of Liberty crown arching over the proceedings, and steel effect art deco high rises either side. It is slick and effective, and I greatly enjoy Millie and Miss Dorothy tap dancing their way up the floors in the hotel elevator, as the jewels on the crown light up one by one. All in all, a few key performances lacking the real power a musical like this demands of them, but a fun evening all the same. 3/5