The Winter’s Tale @ The Barbican Review

Barbican Artistic Associate Cheek by Jowl revisits Shakespeare’s romance 20 years after the company’s renowned Maly Drama Theatre production. Directed by Declan Donnellan, who was recently awarded the Golden Lion of Venice for his ability to bring classic works to life for a contemporary audience, this modern dress production is inventive, irreverent, theatrical and powerful. 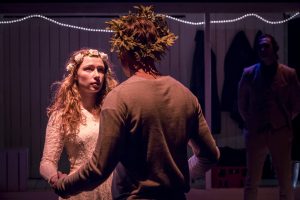 Leontes and Polixenes have been friends since childhood, now they rule Sicilia and Bohemia, respectively. Polixenes is going to take his leave after spending nine months with his old friend in Sicilia and won’t be convinced to stay longer. When Leontes sends his wife Hermione to persuade Polixenes, it takes her only a short time to make him stay. Leontes is puzzled by Hermione’s success and his love for Polixenes turns into raging jealousy as he becomes obsessed by the idea that the child that his wife is carrying cannot be his but must be the fruit of Hermione’s adulterous relationship with Polixenes. He orders Camillo, a Sicilian Lord, to assassinate Polixenes but Camillo informs the prospective victim of Leontes’ plan and they both flee to Bohemia. Leontes, now even more convinced that Hermione has betrayed him, has her arraigned for adultery. Her “bastard” child is to be left in a remote area by Antigonus before he is pursued by a bear.

Declan Donnellan’s production clearly shows the disastrous consequences of male jealousy. Orlando James plays Leontes as a modern monarch in jeans who endears himself with his boyish charm but is prone to mood swings and sudden fits of jealousy. His son Mamillius (Tom Cawte) shares these unpleasant traits with his father, in one scene throwing a temper tantrum like a toddler when his highly pregnant mother requires some rest. Both Leontes and Mamillius need to possess Hermione (Natalie Radmall-Quirke) because they love her. Edward Sayer‘s Polixenes is equally unwise, raising his son Florizel (Sam Woolf) by his own example which results in a hedonistic boy who does not reflect about the consequences of his actions.

Hermione’s trial scene appears even more cruel by the use of video and close-ups as Leontes rages with jealousy, seemingly on the brink of madness. The only character who will stand up to him is Paulina, a strong performance by Joy Richardson. The pastoral scenes in Bohemia have been updated and a sheep shearing festival is turned into a Reality Show whilst Ryan Donaldson makes Autolycus, one of the most annoying characters in Shakespeare’s plays, quite bearable as he sings tuneful songs and invites the cast to line dancing after exchanging a few jokes with the audience. The funniest scene is certainly the Old Shepherd’s (Peter Moreton) voyage to Sicilia and his absurd experience with border control. 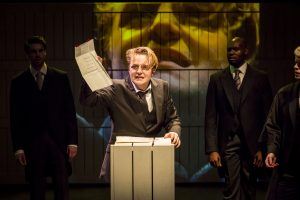 Paddy Cunneen‘s intense soundscape adds to the suspense of the play. Nick Ormerod’s set features an almost bare stage but for a bench and a clapboard box with panels that open up to turn into a ship, a video screen or a TV studio for the sheep shearing festival. The final scene is a candle-lit tableau that becomes truly magical in this powerful and highly imaginative production. 4/5

The Winter’s Tale is currently showing at the Barbican until Saturday 22nd April 2017. To find out more about the production, visit here…
8/9 Apr
Weekend lab

19 Apr
Live Stream
This performance of The Winter’s Tale will be live streamed from the Barbican Centre. Watch here: www.cheekbyjowl.com/livestream

« Previous post
Playwright Naylah Ahmed talks about her latest production, Ready or Not!
Next post »
Founder of Jumprov, Sunny Dhap talks about the collective!