Playwright Naylah Ahmed talks about her latest production, Ready or Not! 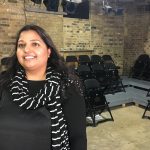 Bruntwood Prize winning playwright Naylah Ahmed returns with Ready or Not, a topical piece of theatre focusing on our post 9/11 world and the experience of Muslims worldwide. ‘The War on Terror’ is a phrase we hear all to often now and have become desensitised by but what does this entail? Who or what is ‘terror’? Who is the enemy? Drawn by this new landscape we find ourselves living in Ahmed speaks about how she has been supported by Kali Theatre to bring this narrative to light.

Your latest play Ready or Not will be showing at the Arcola Theatre this week. Can you explain what the show is about?

The play is about people, about lives and how every life matters.

The play tackles themes of loss, guilt, the fallout from collateral damage in a warring world and the uncertainty of who the ‘enemy’ is. Why focus on these themes?

Because they have been relevant for some time now, and will continue to be so for some time to come. Loss, guilt and everything that falls under the umbrella of the term ‘collateral damage’ is universal and applicable to all of us in some way.

Ready or Not marks your return working with Kali Theatre, having had your show Mustafa (2012) co-produced by them. How have Kali supported Ready or Not‘s journey?

Ready or Not was a concept I’d had and wished to write for some time. It’s an idea I’ve been thinking about and hadn’t had the time to write until a conversation with the previous Artistic Director of Kali, Janet Steele, led to a seed commission: an opportunity and small pot of money for me to write a draft that Kali could then consider for production. The play was written and then offered a full commission off the back of that initial draft. When Janet stepped down after 15 years, the new Artistic Director, Helena Bell, took over and inherited the play. From then on the fine tuning of the script has been done between Helena and I. From the word go, Helena has shown such enthusiasm for and understanding of the script and it’s essentially a 3 hander set in a living room – but the story, characters and scope of the piece is big and Kali have worked vociferously to try and realise that vision and deliver it to an audience.

You have been inspired to write Ready or Not in response to how things have changed post 9/11, in particular for Muslims in Britain and worldwide. What would you like for audiences to take away from the show?

First and foremost – always – a good story told through engaging characters. In addition to this, if audience members are discussing the piece after they’ve left the theatre that’s a bonus.

How did you go about writing Ready or Not?

I started with two characters and a situation. The play grew from there into a first draft. Once a draft is out you can really start to play and undertake any research, exploration needed. Writing (as the well worn-maxim goes) is rewriting, fine-tuning, honing. Even at the latest stages new ideas can come in to play.

Do you feel at present there are enough theatre productions tackling issues such as these in the UK?

Ready or Not will be showing at the Arcola Theatre from Tuesday 11th until Saturday 29th April. For more information on the production, visit here…