It’s Not Yet Midnight @ The Roundhouse Review

Theatre is a collaborative medium, and Company XY are true advocates of this. The power of the ensemble is second to none and knowing that for a certain amount of time, everyone is on the same page is priceless. 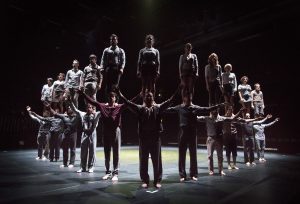 Bringing their third production to the Roundhouse Theatre, Company XY’s It’s Not Yet Midnight celebrates the cast as an ensemble rather than individuals. A duo warm up the evening with a brooding intensity, skilfully knocking each other over. Before the audience even have a chance to figure out the relationship between these two figures, a mass brawl envelops completely drowning the initial scene and this is both frustrating and beautiful; frustrating as this begins to shift any ideas initially formed as to what’s happening but in equal measures there’s a beauty as this creative layering starts to paint a narrative of a falling out perhaps greater than what was initially mapped out.

Cue a great foundation for a nuanced production, an opportunity to pick apart the various tensions within this company/family/community. This however is possibly one of the most exciting scenes, the evening from then on taking on a steadier pace and therefore losing the initial adrenaline of the beginning. The cast are mindful of each other, their solidarity beaming throughout the show and this contrasts nicely with sudden mood changes as the cast clash; showcasing their resilience as they roll with the punches. Company XY bring with them an ease, they perform a series of daring sequences that are without question jaw dropping. Human totem poles are perhaps the evening’s signature stunt, cast members standing on top of one another creating tall towers-this is incredible to watch. Members of the ensemble are flung into the air, swung up into the air (near inches from hitting the ground) and catapulted metres above the ground by a seesaw. These tricks are a sight to behold, and will always be deemed as being superhuman however simultaneously, as the evening loses its structure, can often become repetitive.

There are however two stand out moments from the evening, the first being when the company create various formations as one member of each duo stands on the shoulders of their partner. This sequence ends with the ensemble forming a circular formation centre stage, the performer in the partnership stood on the shoulders shifting partners, the cast members lifting also rotating. This is a great display of strength and creativity. The second stand out is when the company, after creating a human tower, comically cascade to the ground into a bundle. This is fun and showcases the company as a collective not at all taking themselves too seriously. Aude Guiffes and Philippe Mencia‘s Lindy hop choreography contributes to their sense of fun and the sound design really grips the audience and is an influential factor in depicting the ensemble’s world established. 3/5 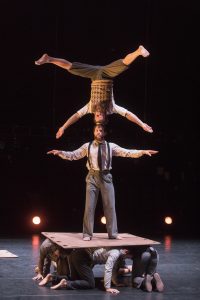 It’s Not Yet Midnight is currently showing at the Roundhouse Theatre until Sunday 23rd April. For more information about the production, visit here…