Moshe Leiser and Patrice Caurier’s production of Madama Butterfly has been revived once more for the Royal Opera House. Leading roles are played by Ermonela Jaho as Madama Butterfly and Marcelo Puente as the naval officer Pinkerton. 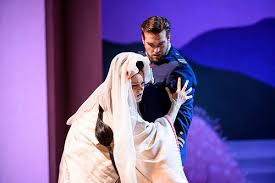 Courtesy of the Royal Opera House

Jaho’s performance as first a patiently hopeful bride but ultimately one who is shattered by betrayal is nothing short of a triumph. Although the set remains aesthetically minimalist, with garden blooms being replicated outside of the house, the fact that the scene remains unchanged during the three acts and serves as our main focus is a clever thing; in so much that we mostly see what happens either in or outside the house. The set becomes another character in the story, with its sliding panels and discreet decorations. A particularly emotional moment unfolds when Butterfly hears of Pinkerton’s return and asks her maid to cover the flat in spring blossom, Butterfly’s joy and innocence is captivating, Jaho excels in this role.

Elizabeth DeShong too excels as Madama Butterfly’s faithful maid, Suzuki. After learning the truth about Pinkerton and the reason for his return to Japan, DeShong gives a moving performance as she is left with the task of telling her mistress of Pinkerton’s infidelity. A cowardly Pinkerton, is performed well by Marcelo Puente but is eclipsed by others, especially Scott Hendricks as Sharpless, a US Consul in Nagasaki. Hendricks’ performance is extremely engaging and his voice is a pleasure to listen to.
The orchestra is fabulous, led by Antonio Pappano, who gently shows off his sound understanding of the intricacies of Puccini’s music.

The lighting designer Christophe Forey also shines, masterfully altering the stage, as the tale unfolds. When Butterfly and Suzuki keep vigil all night in the hopes of Pinkerton’s return, the lighting alters powerfully from night to dawn and further accentuates the sadness of the moment. The production however does not address the more serious aspects of the story, that of imperialism and sexual exploitation. It is easy to forget how young Cio-Cio-San is supposed to be, at the ripe age of 15, the illicit undertones go mostly disregarded. 4/5