Ready Or Not @ The Arcola Theatre Review

Can the concept of  ‘us’ and ‘them’ ever become a thing of history? Sadly, probably not. Who or what creates this notion of ‘the other’? Is it an event? A series of events? The ruling power at that point in time? An influential publication or speaker? Or a combination of these factors? What’s paramount in the West is that daily life has been directly effected by the devastating events of 11th September 2001, we now live in a world where we are constantly on alert and are told that we live in threat of one of our biggest enemies. The media have created a narrative of who to fear, and dangerously building up stereotypes about certain cultures and faiths. 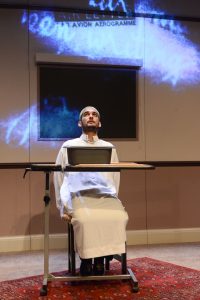 Influenced by our changing world, and in particular the coverage of  ‘the war on terror’ playwright Naylah Ahmed creates a simmering psychological drama picking at a retired middle class teacher’s perspective on current events. Taking place in the front room of the seemingly well to do Pat, unnerving opinions and ideals reveal themselves behind close doors as Yusuf, a young Muslim campaigning for the rights of those losing their lives in Afghanistan and Syria finds himself held hostage. Tensions build as Yusuf hopes for freedom, and Pat’s crusade to save the UK from any threats only deepens.

Naylah Ahmed hauntingly encapsulates the fear inherent within the UK, and subtly comments on just how influential the media have been in the formation of this train of thought. The show taps into the zeitgeist, with events in Westminster and Stockholm acting as recent reminders of the ‘us’ and ‘them’ complex that has become apart of our daily existence. Layla Farzad‘s newsreader voice overs the soundtrack to all our lives. Ahmed was also influenced by the way in which the lives of Muslims have been impacted ever since 9/11 and she begins to scratch the surface on this by highlighting Pat’s lack of understanding of other cultures. This is educational and contributes to the evening’s sinister tone.

Joan Blackham‘s Pat drives the evening, her twisted beliefs and actions constantly making the audience question why she feels the way she does towards Yusuf and how she managed to arrive at this point. Adam Karim‘s Yusuf challenges the idea of what a typical Muslim is and paints Yusuf as a real human being and this is something we need to see more of. Natasha Rickman‘s Holly, girlfriend to Pat’s son Jack (voiced over by Ryan Early) pitches her performance just right, her relationship with Pat a constant battle.

Ahmed creates a complicated character in Pat, someone who seems to have prickly relationships with whoever she interacts with. She is the most developed voice within the play, leaving room for both Yusuf and Holly to be fleshed out more. The evening’s premise initially is far fetched and it takes time to acclimatise, however the audience accept this uncomfortable reality and this is in part due to Sophia Lovell Smith‘s surburban front room set design. A single chair positioned in front of a TV stage left provides Pat with the latest news, whereby a wooden table stage right houses a barrage of bouquets given by friends and family. Daniel Denton‘s video design takes on a presence all of its own, words scroll onto the wall upstage as Jack’s voice over Sheds momentary light on a fractured mother/son relationship. Chris Drohan‘s sound design successfully contributes to the evening’s warped reality and Katherine William‘s lighting design compliments Denton’s projections. Helena Bell directs a steady psychological drama, however it’s an evening of two halves with a rushed ending. 3/5

Ready Or Not is currently showing at the Arcola Theatre until Saturday 29th April 2017. For more information on the production, visit here…