The Plague @ The Arcola Theatre Review

When Albert Camus wrote his novel The Plague in 1946, it was considered a metaphor for the rise of fascism. Although director Neil Bartlett usually shies away from adapting novels because it is so very difficult, he felt that this particular work remains highly relevant today. Bartlett keeps all of Albert Camus’ – translated – words and only cuts and reworks the novel according to his concept. 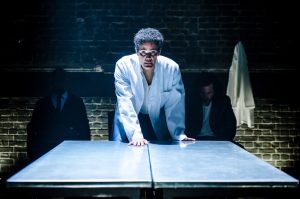 Set in Oran, Algeria, Bartlett’s play resembles a verbatim piece investigating what happened during the plague. Witnesses are assembled to give account in an inquiry. The stage is bare except for two metal desks, five chairs and three microphones.

The witnesses begin by defining the nature of the city – an open, friendly place where people are going about their day-to-day business. The events of “that spring” come completely unexpected. Dr Rieux (Sara Powell) relates what happened in the first few days of April when the first dead rats were found. The other four witnesses listen in silence – Jean Tarrou (Martin Turner), a resident in Dr Rieux’s building, Mr Grand (Burt Caesar), the journalist Raymond Rambert (Billy Postlethwaite), and Mr Cottard (Joe Alessi). Dr Rieux describes how the disease spread within a few days, which means that it must have already been there. First there were only a few rats, a few days later thousands were found in the streets. A week later, the first human victim of the disease was found. Caretakers and people in poor neighbourhoods were taken first, then it spread to the wealthier parts of town. Whilst Dr Rieux is convinced that this disease is “the plague”, the other doctors disagree until the number of cases explodes and the whole city needs to be quarantined. Nobody can leave or enter the city, the sick are kept in quarantine camps. The agony and suffering of a sick child raises the stakes to find an antidote to the terrible disease.

The play examines how people might react to this catastrophe, represented by these five characters. Whereas some remain calm and try to do whatever possible to help, others do nothing or attempt to buy their way out of the city, and some, like the petty criminal Mr Cottard, profit from the disaster. The journalist Rambert is desperate to be with his newly found girlfriend, who is outside the city, and he pays a smuggler to get through the city gates. Dr Rieux, whose ill wife is treated in a clinic outside Oran, stays to help although her wife might not have long to live. Sara Powell gives an intense and touching performance as the dedicated doctor, battling her colleagues who are in denial about the enormity of the disease whilst worrying about her wife whom she might never see again. The fact that a male character is replaced by a female character with a wife gives an additional edge to the story. A chorus comments on the events and actions in the plague ridden city and gives the play a Brechtian touch.

The lyrical use of sound (design by Dinah Mullen) and lighting (design by Jack Weir) brings forth the power and poetry of the original novel which is still so relevant today. Director Neil Bartlett was most impressed by one sentence in Camus’ novel: “You have to begin again.” One wonders how often we have to begin again until we finally learn from our past mistakes. 4/5

The Plague is currently showing at the Arcola Theatre until Saturday 6th May 2017. For more information on the production, visit here…