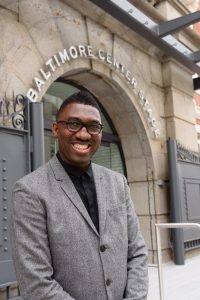 Evening Standard Award winner Kwame Kwei-Armah blazed the trail in 2003, with his fifth work, Elmina’s Kitchen becoming only the second play written by a black playwright to be staged at the world renowned National Theatre. The play would also become Olivier Award nominated, and would also televised, further highlighting the playwright’s ambition and talent. Fast forward to 2017, and Kwame has helped to steer the Baltimore Centre Stage Theater into a collaborative, digitally aware and dramaturgically driven direction, taking on curatorial responsibilities as the theatre’s Artistic Director. Find out more about how the celebrated performer and playwright decided to take on this exciting role in the U.S.

Baltimore Center Stage acknowledge the importance of technology, hosting digital initiatives to engage global audiences. What does this entail?
It entails finding work that unifies us wherever we are. We’ve created these digital initiatives because we want, wherever you are on the continuum—whether you live in Baltimore, you live in Madagascar—that you can partake in the work that we produce here. And our global work, in particular, certainly seeks the universal, it seeks to speak to things that we think are really important. My America, for instance, was about me landing here and saying to playwrights, “tell me about this new country that I’m in.” For My America Too, the country seemed to be in a new place—we seemed to be living through a second civil rights era. What is that? And then the playwrights tell us what they are through their monologues and their duologues. And we’re playing with an idea for a My America Three where we’ll look at the role of women in America today. These projects are theatricalized and captured in a digital fashion, so really it’s doing the work that we want to do on our stages, but recognizing that we’re living in the 21st Century, a digital age.

I wanted to know what it felt like to walk in the shoes of a curator, of someone who looks after and is a green-lighter. When I was in London I was getting frustrated by some of the decisions that were being made by gatekeepers, and rather than complain about it, when the opportunity came up to be an artistic director I thought, well let me see what that’s like. And within months I learned huge lessons. For instance, to get your play produced—your first play in particular—is an act of alchemy. It’s not just about the play. One of my favorite sayings is, “There are a million reasons why you don’t get the job, as an actor. Just don’t let your acting be one of them.” And I feel the same way about plays now. When you start putting a season together it’s not just about the best plays, but it’s about how Play 1 speaks to Play 2 and Play 3, not just artistically, but budgetarily. There are so many factors that go into choosing a season. I’ve learned so much about how certain work gets produced, why certain work gets produced, how you serve audiences in multiple ways.

You’ve experienced the theatre industry both within the UK and the US. Are there any similarities? What are the differences?

America imports British plays and Britain imports American musicals. I’m still trying to work out why. In British playwriting, it’s expected for new playwrights to write a “state of the nation play,” a play that is political, that can be set anywhere. And I think the only difference that I find in American playwriting on the whole—and there are “state of the nation” playwrights, Lynn Nottage being one of them with her state-of-the-nation play, a piece called Sweat—but invariably, American playwrights use the citadel of the family as the metaphor for society. And we don’t necessarily do that in Britain exclusively. But I think the differences are few and far between.

In 2015, the theatre went under renovation, what are the results of this?

We’ve created more opportunities for art making and community building, with new public spaces to gather before and after shows and state-of-the-art performance spaces with the best in theater design and technology. We’re thrilled to reopen our doors and welcome the community as they experience our remarkable transformation.

[Note: For a list of highlights of the building renovation, please visit this article on our website.

Baltimore Center Stage also create various opportunities for aspiring theatre makers and creatives. What can be expected from the internships and writing opportunities on offer?

We hope that some of the people who come here as interns stay with us. Most importantly, it’s about how well we equip young theater practitioners to go out into the world and make their own art and serve the theatrical community. And we take great pride in that.

Baltimore Center Stage also stresses the importance of dramaturgy within theatre, and as a result you have your very own dramaturgical department. Why in particular is it important to focus on this aspect of theatre?

I think playwriting is an art, much like being a wheelwright. Plays are crafted. And I think when one understands that plays and playwrights need the facility and need tools in order to fulfill an idea’s potential, I think we understand that a dramaturg is central to that, who is there to help bounce the idea before it’s read by the artistic director, who is there to negotiate the telling truth or a moment that is about scaffolding. That’s the role of the dramaturg. Not just seeking and finding plays, but actually helping in assisting the new play development. I think it’s magnificently important.

In your 6 years as artistic director, what has been your proudest moment?

I think possibly my proudest moment was walking back into the new building, knowing this community in Baltimore had raised that much money to renovate and create a theater for the 21st Century.

What is your vision of Baltimore Center Stage in 5 years’ time?

To find out more about the Baltimore Centre Stage Theatre, visit here…