Simon Stephens and Imogen Knight have teamed up once more to mix dance with theatre. Call me simple but a production titled Nuclear War does invoke expectations that there will be some global crisis in its make-up. This is not the case with Stephens’ latest piece. 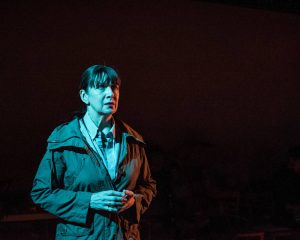 With minimal connections to its title, the story instead focuses on a woman reeling from insurmountable grief, recalling at several points ‘seven years ago’ when she was in the hospital. Both the woman’s inner monologue and her actual conversations are shown in the performance. The text focuses on her personal crisis as she drifts through a lonely city, rapt with extreme inner turmoil, gasping for some human contact.

The low-lit set is quite inviting, as the actors sit around the minimalist stage gently singing whilst the audience takes its seat. The text is delivered partly through pre-recorded speech and partly through Maureen Beattie, who is the protagonist in this 45-minute journey, which is mostly bizarre, unfortunately not in an inspiring way. Moments of real thrill arc far and few, however one notable moment occurs when the 4 performers clad in black, dance furiously and at times violently in circles around Beattie’s character. No names are mentioned and rightfully so, they seem unnecessary.

The performers are great singers and their soulful voices are one of the more enjoyable aspects of the show. The choreography is also interesting; Beatrice Scirocchi and Gerrome Miller in particular are fascinating to watch. The music crosses from country blues to hard-core techno throughout the show; the best part is the beautiful rendition of an old country song by (assumedly) Mickey Newbury. The performances and the text link up haphazardly and unconvincingly. Whilst Stephens is adamant on allowing the director, Knight and the performers equal if not more freedom with the text, the finished piece is far from captivating. Experimental theatre can be a beautiful thing, at times however Stephens’ play seems a little too tenuous to be considered with much seriousness, and falls short of being a successful collaboration between the writer and the performers. 2.5/5

Nuclear War is currently showing at the Royal Court until Saturday 6th May. For more information on the production, visit here…