Hailing from Chicago, veteran improv performers, TJ and Dave, take their eponymous show to Soho Theatre. After a few perfunctory words of introduction, the pair launch into a long-form improvised set, running just under an hour. 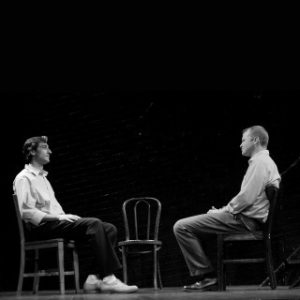 We are told at the start that the performance will be totally improvised, and that neither have any idea what will happen. That said, they begin without asking for any cues or suggestions from the audience, so this has to be taken on trust. While longform typically works without much audience participation, the total lack of interaction can be felt throughout the show. There is something insular about the performance, which doesn’t take any measures to gauge or size up the crowd.

Both performers demonstrate huge technical skill and alacrity. On that level, there’s something basically entertaining about the show, witnessing the two embody different genders, ages and personality-types in rapid succession. Often, however, there doesn’t seem to be much depth to the impersonations. Nor does the scenarios themselves take us into particularly interesting territory. Most scenes seem to focus on the awkward, narrow-minded small-talk between regular, working Americans. We’re introduced to a range of sorry cases: a retired couple planning evening dinner, a stoner who lives with his mother, a 7/11 clerk. As the show plods on and the audience chuckle at the the inanity of their lives, you start to get the sense that TJ and Dave are punching down.

Their approach to improv is certainly unique. Each sketch is delivered in understated tones, framed by negative space. Rather than striving for punchlines or unexpected twists, TJ and Dave find humour in long, drawn out fizzles and moments of bathetic anticlimax. That said, one senses they could do more with the form or push the boat out. 3/5

TJ and Dave was shown at the Soho Theatre from Monday 10th-Saturday 15th April. For more information on Tj and Dave, visit here…