“Currently on international tour, Cheek By Jowl’s tale is a modern telling replete with creative solutions to a tricky Problem Play, balancing truth and a sense of play. 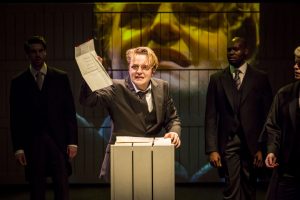 Courtesy of Cheek by Jowl.

In Sicily, Orlando James is a volatile Leontes; a king prone to bursts of energy and passion as first explored with his beloved friend and fellow monarch, Polixenes (deftly played by Edward Sayer). Too like Leontes is his son, Mammilius, played by Tom Cawte with the nervous energy of a child spoiled in upbringing. He is the very image of his father, and so is prone to fits of weakness. It is with no stretch of imagination that the audience sees the potential Leontes has to fall madly into delusions of jealousy.
Beside him, Natalie Radmall-Quirke gives Hermione a dignified forbearance, put to strain as her husband sees to it that all fall around her, further heightening her desperation in a powerful court appearance undermined by the low-angle camera utilised that projected a face of vulnerability onto the screen behind. The later loss of Mammilius is tragic, as the sins of the father seem to lie not just in his son’s upbringing but perhaps a deeper, congenital weakness of the mind. A logical conclusion from his father’s own instability.
Around Leontes at court are strong performances from Joy Richardson’s steely Paulina as advocate for Leontes’ newborn daughter, and Peter Moreton who brings compassion and later comic warmth to Antigonus and the Old Shepherd.
In this second half of the play, our entrance into Bohemia marks a stark difference in tone to the previous high drama we see played out in Sicily. Our welcome comes in the form of Autolycus (Ryan Donaldson), playing to the audience as singer and comedian. For this character his Shakespearean verse is largely cast aside, freeing the actor to play and improvise as some of Shakespeare’s original comic actors reportedly were meant to do.

Comedy is found further with our sheep-shearing feast, which soon dissolves into a Kyle-esque talk show to give the modern voice for our nice but dim Young Shepherd’s relationship trouble (Sam McArdle).
Lastly we reach our return to Sicily. Leontes’ transformation is remarkable, and we meet a man finally deserving of forgiveness and redemption. After warm reconciliations, and a touching reuniting of father and daughter (Eleanor McLaughlin’s Perdita) a spellbinding final statue scene ensues, entwining throbbing vocals, superb lighting and candlelight, and an almost renaissance-style painting being created in front of our eyes as a final tableaux forms around Radmall-Quirke’s now ethereal presence: A family restored, our King redeemed. It is completed finally by the last appearance of Mamillius, his memory entering into the picture and, with a touch of his hand absolving his father, providing closure to what in many productions can be a knot left untied in an otherwise happy ending.

The technical design of stage and lighting pair wonderfully with these performances, and a real sense of balance between design and performance is accomplished as our actors manoeuvre Nick Ormerod’s seemingly simple set of palette-style boxes and large panelled container into the various locations the play takes its audience to. This staging is coupled with Judith Greenwood’s wonderfully evocative lighting design, and the musical workings of Paddy Cunneen, with memorable scenes awash with thematic colours, and flashes of brilliant white momentarily jolting our audience across the stormy voyage from Sicily to Bohemia. 4/5

The Winter’s Tale is currently showing at the Bristol Old Vic until Saturday 29th April. For more information on the production, visit here…