Simply put, this production is one to emote and inspire from beginning to end.
This thought provoking musical tells the tale of a young deaf and disabled boy who is struggling to come to terms with his father’s murder and the struggles he faces in the oppressive world around him, until the world learns of his incredible talent on the pinball machines his late father inspired him to play, allowing him to overcome adversity and sending him into a whirlwind of fame and success. 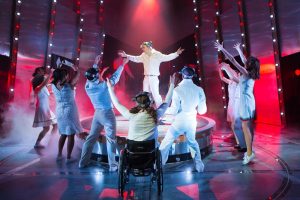 The inclusion of disabled actors within large scale productions is something that is not often seen, however the national project Ramps on the Moon make it apparent just how much the world is missing out on. It is refreshing to see disabled performers being given opportunities such as this, and the incorporation of British Sign Language and captioning into this performance is subtle and smooth, flowing into the dance numbers and movement sequences in a way that simply make it all part of one bigger picture.

Initially the story does a seem a little confusing and perhaps rushed for such an integral aspect of the tale; however all is made clear in the second act and we as an audience are left to revisit the events of the performance in new light. The extravagant, stylistic set allows for detailed setting of the scene, with stunning moments of contrast between darkness and blinding light, opening us up to the confusion and constant change that is Tommy’s life – perfectly portrayed by William Grint in an emotional and poignant performance that speaks volumes without a single word. Some much needed comic relief is provided by Lukus Alexander’s anarchic portrayal of school bully Cousin Kevin, and a spectacular musical performance from Acid Queen, played by the show’s original Peter Straker.

This ‘story through song’ is captivating from curtain up to lights down, keeping its audience hooked from the very first note. The warmth and positivity radiating from this incredible cast even in the story’s darkest moments keeps the performance abuzz with energy, the catchy soundtrack will stick in your head for days on end and this will be a show that sticks with you forever. 5/5

The Who’s Tommy is currently showing at the West Yorkshire Playhouse until Saturday 13th May. For more information on the production, visit here…

Lukus Alexander, Peter Straker, Ramps on the Moon, The Who's Tommy, West Yorkshire Playhouse, William Grint
7th May 2017by Theatrefullstop