In her new production of Salomé, South African director Yaël Farber rejects the character painted by 19th century writers such as Oscar Wilde and creates a nameless resistance fighter instead whose actions lead to major political upheaval in the Middle East. 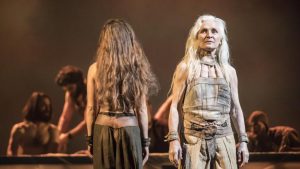 After last year’s outstanding production of Les Blancs,  Farber returns to the National Theatre with a reimagined play about Salomé. Farber started working with Oscar Wilde’s play and found that she wanted to get away from the image of a vengeful siren. Instead she chose to make Salomé, a metaphor for a country ravaged by the Roman colonial power and their puppet ruler – the Tetrarch Herod.

Set on a bare stage, the production contains powerful imagery and much bathos. The performance begins with two women singing Middle Eastern laments as they remove a gossamer blanket from young Salomé. Old Salomé, the Nameless, tells the story of her younger self: “It begins at the end.” “I am the siren that is incomprehensible.” “And so the poem of remembrance begins.” Salomé is also a metaphor for occupied country, Roman Pontius Pilate – who washes his hands as soon as he is on stage – and Client Ruler for Rome. Pilate executing Jewish rebels to defend “his desert”. Pilate and Tetrarch, with little respect for Jewish customs and religion, want to raise taxes or use temple treasure to build an aqueduct, the desert god more important to Jews than anything.

We get lavish spectacle: tableaux that recalls Renaissance paintings, ladders reaching to the heavens and cascades of sand in Susan Hilferty’s stunning design. Already a very slow production, there are moments when it completely stops still to capture posed snapshots. Often they’re beautiful and they force our gaze onto this erased woman, as if the play is painting her back into existence.

Despite its strengths in concept, the execution is frequently disappointing. Drawing on diverse sources – the Song of Solomon, Oscar Wilde’s play and the Roman historian Josephus among others – Farber’s script sounds like a bad translation of a Greek tragedy, with a shot of King James archness added for good measure. Olwen Fouere plays Nameless – an ageing Salomé – with slow, portentous delivery that pushes the play into parody. There’s absolutely no variation of tone in her performance and it makes whatever she has to say sound grandiose and hollow.

Two women provide a wailing soundtrack for most of the production which, chilling at first, becomes intensely grating by the end. And that ending builds to a point where, far from the rich web of text, far from the dazzling imagery that the beginning promises, instead we have all the elements for a 1980s pop ballad video: billowing diaphanous sheets, mist, flailing arms.

The trouble is the way it vacillates in quality. One minute Paul Chahidi as Herod and Isabella Nefar as ‘Salome so-called’ brilliantly perform a repellent, squirm-inducing scene as he forces his finger down her throat in an expression of lust. The next is an interminable exchange of trite similes between Nefar and Ramzi Choukair’s Iokanaan (or John the Baptist). Every few minutes the production reaches a majestic peak and collapses. It makes its point quickly, then labours it with an onslaught of solemnity and histrionics. Salomé is retold here, recontextualised too, but for all the thought behind the production, she is not reclaimed.

In their latest production It’s one of the most notorious, most gruesome moments in the Bible, one of the most often depicted ‘scenes’ in western art: the beheading of John the Baptist at the behest of the young woman we call Salomé (but whose name was not given in the New Testament accounts of the party for Herod Antipas that culminated in the latter’s wish-granting oath and her implacable demand to see the imprisoned firebrand pay the bloody price for her dancing before the guests).

I’d have thought you can do what you will in terms of fleshing out Salomé’s story, provided you stick to the basic ‘script’ when it comes to that vicious, vengeful-seeming insistence on decapitation. And so it proves in feted South African director Farber’s imposingly ritualistic and spiritually intense (to the point of grandly overblown) reading of this chilling female/male showdown.

A young woman half-dances before a lascivious king (who here preys sexually on her, while the historical figure of her mother Herodias, customarily a prompter in the urging of the Baptist’s grisly end, is banished from view). She then issues a cry for the head of “Iokanaan, the Zealot”, smiling as she does so – a sword symbolically running across the neck of a bearded, febrile Ramzi Choukair, rippling away in a loin-cloth.

Alas, this sequence is the most theatrically OTT of the 110-minute interval-less affair, with Isabella Nefar’s triumphant “Nameless” heroine, standing on an elongated, Last Supper-style table gathering giant curtains about her and billowing them furiously to the climactic-operatic sound of wild female ululations – with UFO halos of lighting going berserk too. It’s like some bizarre Eurovision entry that might leave even Graham Norton lost for words.

Her ragged, bare-foot elder self (Olwen Fouere) is seen circling around, looking back on her mistreatment and her pitying infatuation with the baptising outlaw (who invites her to bathe, naked, in water, a respite from the harsh sand that rains magnificently down, in a mockery of hydration). Will she yield up the rationale of her resistance, though, to a bullying, interrogating Pilate? Will she heck.

It looks amazing – with restlessly rotating stages, slow-mo physicality, cinema-epic robes and tableaux vivants worthy of Caravaggio. The aura of harsh antiquity is nicely suggested, with ominous rumbling sounds aplenty. Straining after a quality of high-flown biblical utterance, however, the text is sometimes too-zealous by half. “Your saliva is the secret source of my life,” Paul Chahidi’s creepy Herod oozes – which has more the savour of Fifty Shades than Song of Songs. Worth a look? Yes. A cut above? I won’t stick my neck out on that.

The main problem with the play, for me, is the writing. Farber’s text is an odd mixture of myth speak (“I am Chaos, Grace of Fire”) and contemporary references (stuff about taxes, profit and colonialism). It’s verbose, declamatory and manages at the same time to be both over-explicit and muddled. Sometimes, as when Herod talks about the charms he expects to find between his niece’s legs, it is hard to resist a guffaw at the ridiculousness of it all. When he says, “Your saliva is the secret source of my life” embarrassed cringing seems like an inadequate reaction.

Still, there is a lot to enjoy in Farber’s directing and Susan Hilferty’s design. The main plus is the atmosphere of the piece. The evening begins with clouds of incense, gossamer fabrics wafting in the air, and continues with ritual gestures, the pouring of sand, wailing singers, and the deep growl of Adam Cork’s music, lit up by distant chimes. The spell is woven, only to be broken by the banality of some of the words. Although parts of the text work as a kind of biblical incantation, bathos always lurks behind some palace pillar. There is simply too much imagery, too many metaphors and too much poetic uplift. To distract us, figures move in slow motion around the giant Olivier stage, the constant movement propelling the narrative (and there is a lot of background detail to absorb) forward.

Oh well, at least the acting is watchable. Isabella Nefar and Olwen Fouéré convincingly play the young and the old Salomé, while Paul Chahidi lends Herod a truly salacious demeanor and Lloyd Hutchinson’s Pilate looms dictatorially over the action. As Iokanaan, the Syrian-French Ramzi Choukair speaks his lines – including some that come from Jesus – in a Middle-Eastern tongue, which requires a translation projected onto the back wall of the theatre, at the best of times a bit of a distraction. Still, his millenarian fantasies come across strongly. But the earth-shaking ending of the play seems to me to use a celestial battering ram, complete with angelic choirs, when maybe a quieter approach would be more emotionally sincere, and more moving. 3/5

Salomé is currently showing at the National Theatre until 15th July 2017. For more information on the production, visit here…