The Ferryman @ The Royal Court Review

Suspense is created and built from the beginning when Father Horrigan is being questioned in between two men; their positions suggesting this is more than a mere conversation. 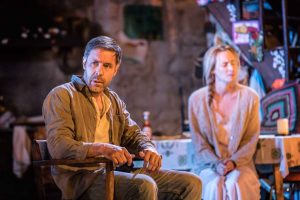 Courtesy of The Royal Court.

The set design by Rob Howell is great, very homely and inviting, it instantly draws you into the Carney family’s world. The story begins with a man and a woman enjoying each other’s company; dancing, a couple we assume, only to realise this is Quinn’s sister in law, Caitlin, played by the riveting Laura Donnelly. Later we find out she is in fact Quinn’s missing brother’s wife. The emotional scenes between Laura Donnelly and Paddy Considine are stirring and feel wholly authentic. The dialogue is fast paced, it keeps the audience rapt. Donnelly is especially good, as are the young Carney girls. The body language between the characters is excellent.

The play is sprinkled with humor, genuine humour. The way old Uncle Pat, played by Des McAleer, pours himself a drink at breakfast. The children also have great comic timing, in particular Grace Doherty who plays Honor. Aunt Pat, played marvellously by Dearbhla Molloy brings the darker elements of humour, with her flippant joke referring to Uncle Pat being as funny as an orphanage on fire. Guilty laughs all around.

Tom Kettle’s presence, played by the giant yet gentle John Hodgkinson, shows how some are still rattled by an English man in the midst of Irish lands. Talk of taking in strays causes a tense moment between Caitlin and Aunt Pat. One starts to sense underlying tensions permeate the family. The priest, Father Horrigan’s involvement in the whole affair raises important questions, which culminates in an extremely poignant scene where Uncle Pat has been quoting Virgil, upon finding out that Father Horrigan has not been telling the truth, he states there are only two types of souls forbidden to enter the beyond, the unburied and those that lie to the innocent.

The characters are carefully constructed – Oisin’s breaking of the kite contrasts his outburst at the dinner table. Aunt Maggie Far Away’s character is fantastic, played enigmatically by Bríd Brennan, in her brief moments of lucidity she recounts stories of the past to the children. A sense of myth and magic pervades the story, set against the backdrop of The Troubles in Northern Ireland.
Butterworth is very good at portraying a chilling sense of foreboding. This is evident in the closing scene of Act One with the dead goose for example; after finally being caught the goose is left hanging upside down. It leads the audience to question if this is more foreshadowing or in any way symbolic? At all times however, it is engrossing.

Emotions are up and down, with the spontaneous Harvest dancing ending in a visit from the Brotherhood. Act Two begins to fill in some blanks, as we learn about Quinn’s past and Mr Muldoon’s character becomes more discernible. The final act revolves around themes of justice and revenge, leading to an astonishing climax. The cast are charismatic and their performance is sublime.
Often there are many characters on stage, atypical of course of a large Irish family. However, the production is cinematic; the stage does not feel overcrowded. Sam Mendes has done a fabulous job directing this ensemble. The attention to detail from Butterworth to create depth in his characters is admirable.

Music is not used too often but feels on point when employed; Act Two for example has sounds of crows cawing and haunting violins. Also the contrast of Irish country music with cult classics such as Kim Wilde adds a touch of lightness to the play.

Jez Butterworth has created a fascinating story, with interwoven details that flow together to create a brilliant play. The Ferryman is exceptionally well written, intricate and devastating, it delights and thrills. 5/5

The Ferryman is currently showing at the Royal Court until Saturday 20th May. For more information on the production, visit here…