Classical ballet at its finest! The Birmingham Royal Ballet’s three part performance selection is smart, well thought out and engaging for all to enjoy. After a long anticipated return to the York Theatre Royal stage, the space is packed full of enthusiastic audience members, who can’t help but applaud after every second bar. A grand affair! 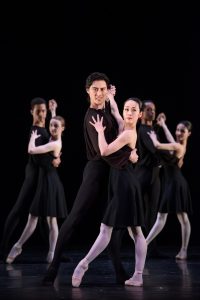 The first piece Solitaire- A kind of game for one… , choreographed by Kenneth MacMillan, beams playfulness, a positive group dynamic, as well as packed full of upbeat content. The lead performer – known as The Girl, played by skilled dancer Brooke Ray, displays defined lines, a beautiful fluidity and strong command of the spotlight. Ray’s character feeds throughout this piece, reacting to dancers around her and mimicking their movements in parts. This piece represents power and, in parts, amusement and does remind one of the traditional style of ballet present during the rise of the Italian Renaissance. Classically dignified.

Following a brief interval we are suddenly transported to the back streets of Spain for a set of 5 Tango’s (ironically the pieces title) for a sharp and fiery twenty minutes of passion. The moody cinematic style of ballet merged with the drive seen in a Tango number has all eyes fixed from the get go. No stage décor, basic black dress and a dark mist of stage space, yet the dancers exude confidence and dominate the piece from beginning to end. A change after the calmer and softer first piece as the entire performance becomes a sort of smorgasbord, offers up differing treats with their own individual flavours and intensities.

However, the tasting menu does not end there, oh no! Pineapple Poll, choreographed again by MacMillan, brings a sort of Pirates of Penzance humour to the seafaring city of Portsmouth. This piece is by far the most character driven of all and tells the story of an attractive Admiral Lord Nelson look alike who is the talk of the town, but more so the feminine members of society. Men want to be him and women just want him, so much so that they dress up as male sailors and sneak aboard his vessel undetected. Leaving the poor captain slightly bewildered, yet happy in finding the woman of his dreams nearer the end of the piece. Opposed to the other two scenes you have bright coloured set pieces, ship cannon props (that fire up a storm) and a dress code that would put a Ukrainian folk dancer to shame. Loud, proud and extremely patriotic!

Overall, the Birmingham Royal Ballet put on a classical and well organised set of routines in this special two day performance. It explores passion, motivation and even comedy, which gives audiences a short snippet of the different styles that ballet has to offer. Traditional, yet strangely contemporary. Dramatic, yet relaxed. A journey throughout the different genres and styles of one of Britain’s most oldest and celebrated styles of dance shown to its strongest. The people of York will demand a comeback soon I am sure! 4/5

The Birmingham Royal Ballet performed at the York Theatre Royal from Friday 13th until Saturday 14th May. To find out more about their latest productions, visit here…