A two-pronged storyline creates greatness and confusion in similar measure. Euripides’ Medea: A barbarian princess has married the hero Jason after aiding his quest for the Golden Fleece; is abandoned by him for a more royal match and, in revenge, accomplishes the murder of Jason’s new wife, and Medea’s own children. 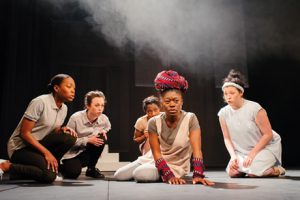 In this interpretation, director George Mann tells the Ancient story in parallel to another by Chino Odimba: Our new protagonist, Maddy, is a military wife who, thrown into a troubled divorce, discovers her defiance in the resonant themes of Medea’s own story: A woman of little status against the forces of a male-favouring society.

So it runs that our play flits between the ancient and modern stories as each chapter occurs, achieved visually through Katherine Williams’ shifts of cool, urban blue for Maddy’s Bristol to dusty yellow for Medea’s Iolcus, each corresponding character shifting worlds through highly contrasting storytelling: spoken word, to sung text.

Melodrama’s origins of ‘music-drama’ is fully realised in this production, as the entire Greek story is performed in a kind of epic-song musical; a somewhat bemusing choice. Whilst powerfully done, the singing begins to fall on somewhat deaf hears due to the sheer relentlessness of the high-dramatic tone the musical composition has throughout. Beginning the play at a high emotional point, it is made difficult to journey anywhere else, which begins to grate in the epic tone of each song. Whilst in Greek tragedy high emotion is not of course something to be surprised at, it is important that by placing a modern, therefore more connectable story alongside it, the Bristol story is given a scale that makes it hard to feel close to.

Further difficulty is in deciphering the play’s real message. The writing is littered with strong slogans of female empowerment, “History is made by women, just as much as men”, but such statements feel disconnected in the context of Maddy’s injustice, of Medea’s own revenge plot. For the many who attend theatre in this theatre, the sentiments of equality and social justice aren’t, daresay, new and challenging themes. As a result the slogan-like insertions, well-meant though they are, feel on the nose at times, more so by the somewhat obvious renderings of Euripides’ Greek.

The redeeming strengths of this production lie very strongly in the power of the performers onstage. The vocal talent of all the actors -who must all be named, Michelle Fox, Akiya Henry, Eleanor Jackson, Kezrena James, Stephanie Levi-John and Jessica Temple – are phenomenal. Key also to this production is its sense of identity, and Odimba’s Nigerian heritage enters well into Maddy’s arc, especially with a superb Yoruba invocation reminding us in the modern story of more ancient traditions beside classical Western myth.

In all, the production has elements of real greatness: Shizuka Hariu impresses with a simple yet epic design; the musical composition could have real potency if sparing; what Odimba brings in cultural elements feels very well-placed. But the gabbled message, the perceived lack of trust to use the source Greek story as a standalone statement without needing it interpreted through a modern equivalent has meant that this production, for its victories, falls short of a truly successful play. 3/5

Medea is currently showing at the Bristol Old Vic until Saturday 27th May. For more information, visit here…