The Pulitzer Prize is renowned for celebrating pieces of work that not only capture a moment or movement but endure the test of time. The Color Purple is one of those novels. Penned by Alice Walker in the early 80s, Walker’s pivotal work, tackling a multitude of otherwise swept aside topics, still resonates today. 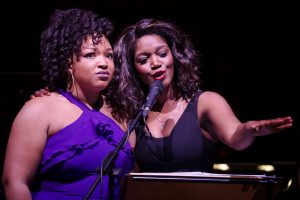 Danielle Tarento‘s production at Cadogan Hall bottles up the mood of the narrative by offering the the audience a soulful and heartfelt auditory experience. Considering that the Broadway musical is stunning audiences and critics alike, this interpretation really wants for its audience to listen to the words sung and spoken rather than to solely watch the evening. The auditory element is the evening’s selling point and if this is the manner in which the narrative is solely delivered then this in turn would make for a perfect evening. The edit however is very concerned with keeping as true and loyal to the script as it can that it’s frightened of throwing away any details. This draws out the evening, and the powerful narrative begins to flag; resulting in the lack of emotional investment towards certain characters.

Marisha Wallace‘s Celie is the show’s heart. She keeps the show’s pulse beating. When she’s low, we’re low too. When she’s joyous, we celebrate with her. When she sings, we are all left in absolute awe; her vocals punch, fight, belt, bellow and plead, her vocals deliver such heart wrenching agony, that there isn’t a dry eye left in the building. Her performance is inspired, she inspires plenty of women in the building who may have endured emotional or physical abusive relationships and have been able to overcome them. Walker’s novel is so rich in timely issues such as relationship hierarchy, race, emotional and physical abuse, sexuality and femininity, and this version really allows for the audience to sit and listen. 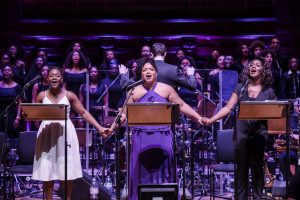 James Taylor conducts a beautiful score. The orchestra are crucial in supporting the production’s tone, switching the mood if the narrative calls for it. There is no doubt that The Color Purple is a challenging production to watch, but it is a must see none the less. The choir are a welcomed addition to the evening, maintaining the spiritual energy mentioned in the script throughout. The trio of backing vocalists act as overseers of the evening, guardians if you will, informing the audience of what’s happening. They are careful not to overshadow and compliment the evening. The evening is built on a basis of camaraderie.  Although the audience root for Celie, the cast work support, bringing scenarios to life. There’s a true sense of a team effort, and this is the true spirit of theatre. 3.5/5

The Color Purple In Concert was shown at Cadogan Hall on Sunday 21st May 2017. For more information on the British Theatre Academy, visit here…