Beware of anyone who tries to sum up this stage version of Robert Anton Wilson‘s book Cosmic Trigger by Love and Will Productions because to get too much of a handle on this genuinely strange and wonderful production would diminish it. A play peopled by the likes of Aleister Crowley, William Burroughs, theatre pioneer Ken Campbell, the goddess Ishtar (summoned at the beginning of the play), and Timothy Leary is always going to promise something out of the ordinary. And it delivers in spades. 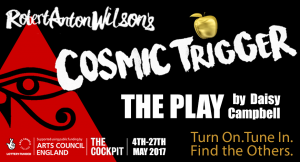 Wilson came to counter-cultural prominence co-writing seminal 70’s trilogy Illuminatus! a fictional romp through various conspiracy theories. His autobiographical follow up was Cosmic Trigger and the play gives us a multilayered, meta account of its more autobiographical content and subsequent impact, weaving a kind of potent, benign theatrical spell on its audience, as if the piece has channelled not only Crowley but Antonin Artaud.

The play depicts Wilson’s experiments in ritual magic and L.S.D. and mirrors, seemingly hapazardly, his changing perceptions and attempts to heighten his consciousness. With nudity, song-and-dance numbers, sex, neurology, symbolic projections, and magical initiations, leavened with lots of humour and an all round tongue-in-cheek virtuosity, it might appear to threaten to spiral off into chaos, but a well structured script holds it all in place, as do excellent performances by Oliver Senton as Wilson, and Kate Alderton as his wife Arlen, keeping the proceedings rooted on the earth plane as much as they can (drug-induced hallucinations and sex magick aside), as they attempt to deal not only with the unpredictable consequences of esoteric practise but also intense personal tragedy. An ensemble cast double and treble up in various roles and disguises, and if the American accents sometimes waver, it’s more than made up for by gutsy, fully committed performances.

Writer and director Daisy Campbell pulls this off with plenty of wit and bravado, taking advantage of the subject matter to add absurdist and surreal elements to the festival flavour. It would be cosmically fitting if Cosmic Trigger somehow found it’s way to the National Theatre as her father Ken Campbell’s famous version of IIluminatus! did. This is daring, delightful, maverick theatre at it’s most vibrant and beguiling. A passing knowledge of Robert Anton Wilson’s work is helpful but equally this production could serve as an introduction to his ouevre. Allow yourself to be summoned before it closes!

Cosmic Trigger runs at the Cockpit Theatre until Saturday 27th May 2017. For more information on the production, visit here…