Catch Me @ The Underbelly Review

Flip Fabrique are the exciting circus fresh faces from Canada, which has brought us many sensational circus acts such as Cirque Du Soleil and Les Doigt. The company was created in 2011 by graduates of Quebec City Circus School. They performed extensively with esteemed companies around the world such as Cirque du Soleil and Cirque Éloize.
The company adopts a creative and collaborative approach developed entirely by its artists and director. This approach spotlights each performer’s qualities and strengths. 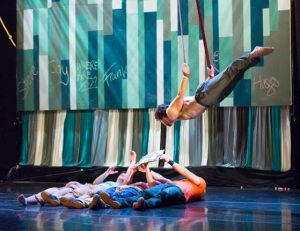 The identity of the troupe comes from the true emotions behind each artist’s eyes. They are all true friends that journey in the same direction. Their show is about their friendship and the feelings they have for each other.
Flip Fabrique perform at the Underbelly stage at the Southbank, celebrating it’s ninth year. Catch Me attempts the story of a group of friends reuniting at a cottage, with dazzling circus acts in Hoop, Straps, and Wall Trampoline. The cast are clearly enjoying themselves and it is highly infectious, with a cast of five men and one female it’s hard for her not to play the stereotype. It immediately becomes political just by her merely being the only female, she is accepted as ‘one of the guys’. This is just a reminder that the gender imbalance with contemporary circus still exists.

The circus acts within themselves are world class and their talent cannot be diminished. A stunning straps act is performed above the heads of the group of friends while they are reminiscing over a photo album. A beautiful duo CYR wheel wows the audience but the finale act of Wall trampoline tops the night.
It’s a shame the humour is simple and silly and at times feels like a weak through line in between the acts. This is what lets the company down as each individual skill is astounding but the weak story line does nothing for the show. It’s still an enjoyable show and the cast stay true to their ethos by promoting ‘joy, playfulness and friendship’. 3/5

Catch Me is currently showing at the Underbelly, Southbank until Saturday 30th September. For more information on the production, visit here…