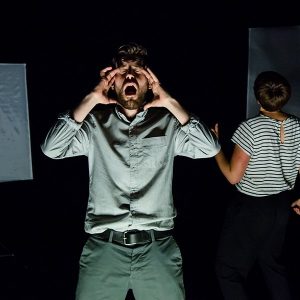 Credit must be given to the script, as moments of comedy are tactfully weaved in, to remove the heaviness of the overall delivery. These moments maintain audience engagement and are performed with warmth and depth by Daniel Foxsmith. Josephine herself is a capable performer. She flits between humour and devastation well, and her opening monologue is her most powerful. She could do more to differentiate between her characters, as I leave feeling unsure whether it is two or three characters that she is performing.

The dance sequences are simple, yet poignant. The use of music allows the actors to feel it in their body, and let that drive their movement. I only wish that they trust their impulses more, as it would  lead to a more raw and evocative delivery.

The stage design looks like we are on the set of a photo shoot. It might as well be; the effort the characters put in to take a good nude photo is extensive, as they consider what the right angle is to show off their best features. There is an altruistic nature of getting a kick from sharing on social media; the rush of taking an exposing photo and hitting ‘send’, feeling free and in control. These characters know it’s wrong, but they are addicted to the thrill. What happens then, when that same control is taken from you, and your photos are uploaded online for the world to see?

Blush is currently showing at Soho Theatre until Saturday 3rd June 2017 For more information on the production, visit here…