With the nightclub scene diminishing before our very eyes, how do we as a community politically respond to that? Clubs can be church for people, a place of escape, and a chance to be someone different for the night. According to the Mayor’s office, over the past five years the number of nightclubs across all of London’s 33 local authorities has decreased by fifty percent. Last Night tells the story of the people who experience clubbing as their ritual. Using original music, poetry and audio recordings, this piece tells the story from all perspectives, giving a well-rounded account on what a London night out is. 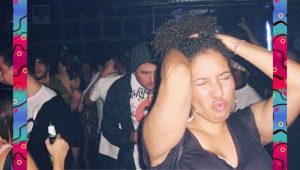 Courtesy of the Roundhouse.

Benin City are an exciting trio. Blending electronica, brass and spoken word, their ability to tell stories through performance is remarkable. The three of them compliment each other well, and you can tell that they live for this sort of vibe. The music they create is raw and evocative and the words they speak ring true with anyone who has ever experienced a night out. They perfectly capture the sensations of going to a club, meeting that special person, and feeling that high diminish on the night bus home.
The supporting band is just as brilliant. Despite being at the back of the stage, they do not fade into the background, instead providing an energetic underscore to the spoken word. Credit should be given to Nabokov, a cross-art form company. Together, all parties have created an event that feels important. In a culture where clubs are being shut down, places like this are vital.

The material is not only original, but really surpasses expectation on the power of spoken word. The experience is a special one; you feel at home with your kind of people, sharing in a special moment of euphoria and nostalgia. Last Night is an electric evening. The next time Benin City performs, I’m there. 5/5

Last Night was shown at the Roundhouse as part of the Last Word Festival on Tuesday 30th May 2017. For more information on Benin City, visit here…